ARSENAL have reportedly stepped up their pursuit of Oleksandr Zinchenko.

But they face stiff competition from West Ham for the Manchester City star.

The Ukraine star has gone on to win four Premier League titles while making 128 appearances.

But Joao Cancelo is City’s No1 left-back after another incredible season.

And Pep Guardiola is also thought to be in the market for Brighton’s Marc Cucurella. 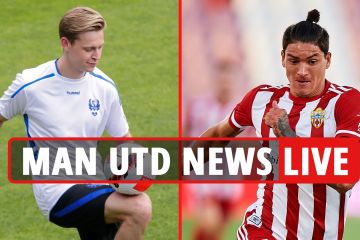 It means Zinchenko may end up quitting City in search of regular minutes elsewhere.

And the Standard claims Arsenal have emerged as contenders after Arteta worked with Zinchenko during his time as Guardiola’s assistant.

The Gunners boss wants Zinchenko to help cover for the injury-prone Kieran Tierney, who himself can play as a centre-back.

But Arsenal are also ready to use Zinchenko as a midfielder when required, thus providing him with a regular starting role.

However, West Ham are lurking as David Moyes prepares to hijack talks.

The Hammers are set to sell Arthur Masuaku, leaving Aaron Cresswell as the club’s sole left-back.

West Ham failed with a £50million bid for Leeds’ Kalvin Phillips in January.

While new target James Ward-Prowse could command a similar fee from Southampton.

So acquiring Zinchenko would effectively solve Moyes’ left-back and midfield issues in one stroke.

Previous post Ariana DeBose on Hosting the Tonys: ‘Whatever We Do Is Going to Be Fun’

Next post Massive migrant caravan disbands as Mexico hands out travel permits; migrants expected to head to US