Flag Day is embraced each year in a handful of proudly red, white and blue all-American communities with the patriotic pomp normally reserved for July 4th, Independence Day.

These cities and towns even vie for Flag Day bragging rights — often with conflicting claims — over who is offering America’s first, biggest or best Flag Day parades and celebrations.

The collection of fervent Flag Day communities stretches from sea to shining sea. It includes heartland towns such as Appleton, Wisconsin, and Three Oaks, Michigan, as well as Fairfield, Washington, on the Palouse of the Pacific Northwest, and historic Quincy, Massachusetts, which overlooks Boston Harbor on the Atlantic Ocean.

FLAG DAY BY THE NUMBERS; 10 FACTS ABOUT THE AMERICAN FLAG

Troy, New York, was once on the list, too, with a venerable parade that organizers touted as “the nation’s largest celebration of its kind.” 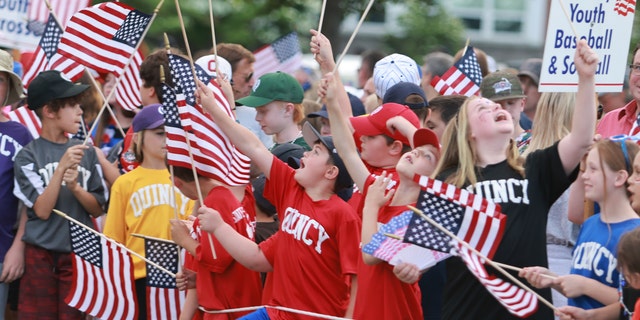 Quincy, Massachusetts, has celebrated Flag Day each year since 1952. Among the highlights: a parade featuring children from the city’s youth sports programs. (City of Quincy/Lisa Aimola)

Flag Day is celebrated each June 14 to honor the 1777 date when the Second Continental Congress adopted America’s familiar stars and stripes as the national flag.

“Resolved,” Congress declared, “that the flag of the thirteen United States be thirteen stripes, alternate red and white; that the union be thirteen stars, white in a blue field, representing a new constellation.”

Many Americans know that design today as the “Betsy Ross flag.” 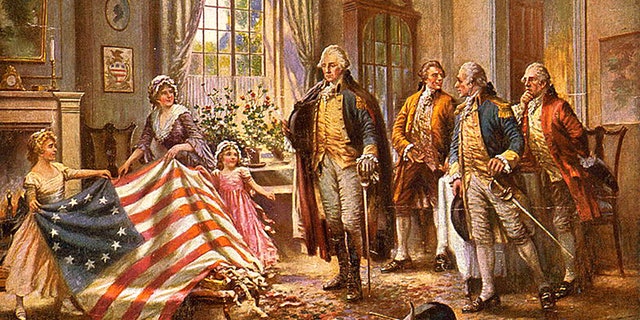 The Pennsylvania flag maker, according to tradition and lore, was the first to stitch a standard in accordance with the new direction of Congress.

President Wilson issued a Flag Day proclamation in 1916, as the nation debated entry into World War I.

Yet the holiday truly gained recognition in 1949, in the patriotic glow of a victorious United States after World War II, when Congress passed — and President Truman signed — a law establishing June 14 as National Flag Day.

“Everybody should take pride in Old Glory”  — Mayor Tom Koch of Quincy, Mass.

Each of these all-American cities and towns celebrated a full slate of Flag Day activities this past weekend for the first time since 2019 — putting pandemic shutdowns behind them.

Appleton held its first Flag Day Parade in 1950. It has grown into one of the most spectacular in the nation, attracting up to 75,000 viewers lining the street each year bedecked in red, white and blue. 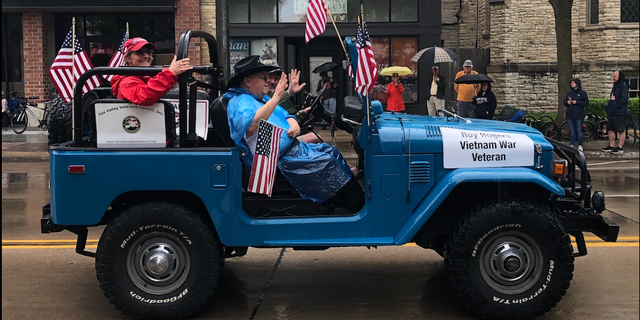 The parade has grown up with Flag Day itself.

Members of the Appleton Elks made the decision in 1949, just as Truman was signing the congressional act recognizing Flag Day, to launch a parade the following year. 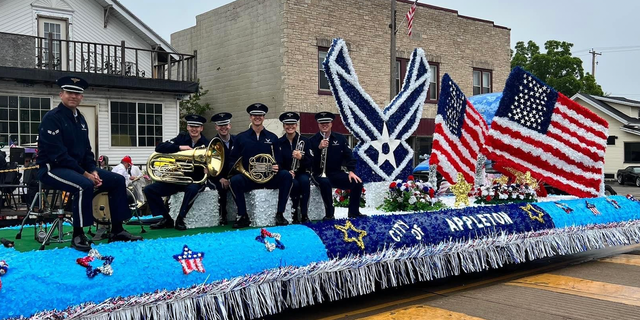 “The Elks, many of whom were WWII veterans, wanted each citizen to be proud to live in the United States of America and to appreciate their freedom,” Eric Stadler, assistant chairperson of the Appleton Flag Day Parade Committee, told Fox News Digital.

It’s more than a parade. It’s a celebration.”

“It’s more than a parade. It’s a celebration.”

Each year, organizers honor a different branch of the military. This year, that distinction went to the United States Air Force, with Brigadier Gen. Robert P. Palmer, a Wisconsin native, serving as honorary parade marshal.

But Fairfield boasts an unmatched Flag Day tradition, which it claims is the oldest in America. 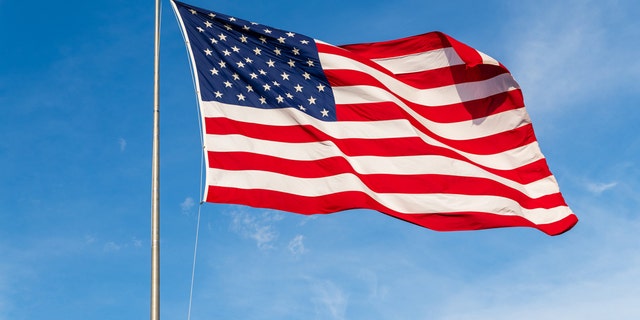 Fairfield, Washington, claims it is “The Town that Celebrates Flag Day.” The small farming community packs a ton of activities into its Flag Day celebrations, including a firefighters’ pancake breakfast and a children’s parade. (iStock)

The tradition goes back to 1910, when it became “the first city in all of the U.S. to celebrate Flag Day,” the site claims — a legacy that’s now 112 years old.

Fairfield boasts an unmatched Flag Day tradition, which it claims is the oldest in America.

The town was incorporated only in 1905, so its Flag Day tradition is nearly as old as the community itself. The tiny farming community packs a lot of activities around its Flag Day celebrations: firefighters’ pancake breakfast, children’s parade and “grand” parade, softball game — even a beer garden.

The “City of Presidents” boasts a uniquely patriotic history. The bustling community next to Boston is one of the oldest cities in America — Quincy celebrates its 400th birthday in 2025 – and the birthplace of Founding Fathers John Hancock and second U.S. president John Adams, along with another U.S. president, John Quincy Adams. 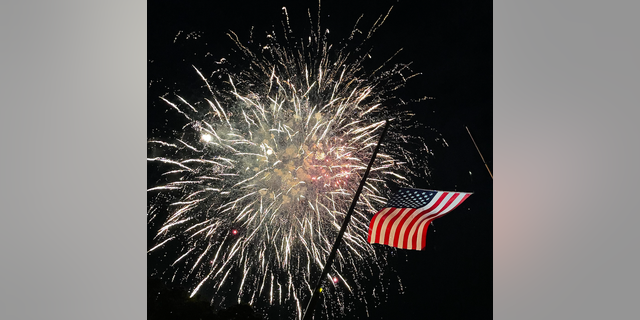 Quincy, Massachusetts, is one of several communities across America that embraces Flag Day with all the fervor usually afforded the 4th of July. Its 71st annual Flag Day celebration took place Saturday, June 11, 2022. (Richard Ash)

Its Flag Day celebration is uniquely spectacular, capped by a massive fireworks display that reflects off the waters of Boston Harbor and attracts thousands of guests each year — guests that span several generations.

Quincy’s Flag Day fireworks are shot off in front of a giant flag that hangs from two firetruck ladders, adding a layer of patriotic pageantry.

The community’s Flag Day heritage began in 1952, when its first parade was organized by Richard Koch, the city’s director of parks and recreation.

His son, Thomas Koch, has been Quincy’s mayor since 2008.

MEET THE AMERICAN WHO INVENTED THE ‘CLEAN, WHOLESOME’ CORN DOG

“Flag Day has a very special meaning to me because my dad started the celebration in Quincy,” Mayor Koch told Fox News Digital. “Having said that, everybody should take pride in Old Glory, for it is the greatest symbol of freedom and liberty in the world.”

She posted a photo of herself wearing a red, white and blue headband and scarf, while noting her 30-plus years of attending Flag Day festivities in her hometown.

This tiny village near the Indiana border packs a patriotic punch. 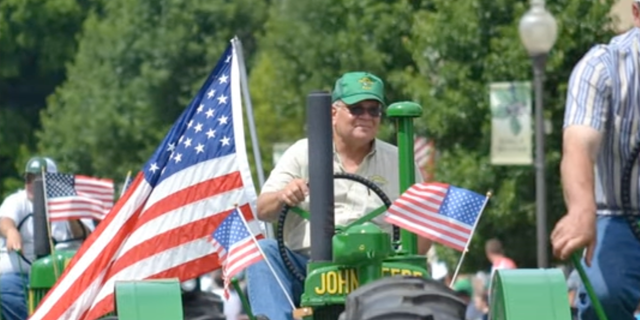 The claim is based upon number of units. This year 126 different bands, floats and groups marched down the streets of Three Oaks, said Heather Whitlow, the event’s co-organizer with her sister, Dyane Thomas.

“We love our veterans. We want to support our flag.” — Three Oaks parade organizer Heather Whitlow

Three Oaks celebrated Flag Day for the 70th year in a row this past weekend.

“We love our veterans. We want to support our flag and bring awareness to the bravery that this country is all about,” Whitlow told Fox News Digital.

The parade has grown into a three-day patriotic festival, featuring a road race, motorcycle run, public market and entertainment, among other activities.

The celebration each year is highlighted by a military flyover.

Gloria Priest, 90, a Korean War-era veteran of the U.S. Army, was honored as the Three Oaks Flag Day parade grand marshal this year.