GEORGE RUSSELL is confident his Mercedes team-mate Lewis Hamilton will improve once problems on his car are fixed.

Hamilton, 37, has battled issues in his W13 throughout the season and was in visible pain when he got out the vehicle at the end of the Azerbaijan Grand Prix.

George Russell believes Lewis Hamilton will soon be back to his bestCredit: Reuters

Hamilton’s car bounced along the straights in Baku.

Fellow Brit Russell told Sky Sports F1 that Hamilton will be a “whole different beast” when the problems are sorted.

He was speaking after finishing third, with Hamilton fourth.

The 24-year-old is now fourth in the F1 standings after eight races, with Hamilton in sixth.

Russell added: “If you’d told me that before the season started, I would’ve been very pleased and obviously would’ve taken it. 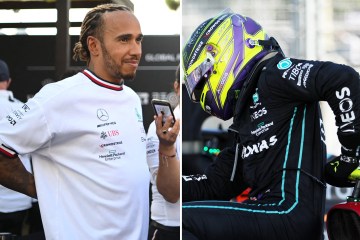 “Ordinarily if you finish ahead of Lewis you’ve either won the race or are guaranteed a podium.

“Things are obviously different but I know how capable and great Lewis is and once we get the car, I’m sure he’s going to be a whole different beast.

“We’re so fixated on trying to solve these issues.

“But we’re not fixated on trying to maximise a race weekend and focusing on our driving because there’s so many issues to think about.

“I’m sure once we’ve got a good car underneath us the true Lewis Hamilton will be out there and fighting strong.”

Hamilton held his back in pain during post-race interviews and said: “I can’t express the pain you experience. At the end you’re just praying for it to end.”

Last year’s champion Max Verstappen is top in the standings after victory in Baku, with F1 now heading to Canada next weekend.

Previous post Ginni Thomas Has a Lot of Explaining to Do