RICKY HATTON wants a sparring session with “k***” Jake Paul as he prepares to make his boxing return.

The British legend is training to fight for the first time in ten years in an exhibition bout on July 2.

Ricky Hatton after a sparring session with his son CampbellCredit: Twitter / @HitmanHatton

And just like during his iconic prime years, Hatton has been whipping himself into sensational shape in his Manchester gym.

His training base has been famed over the years, housing the likes of Tyson Fury, 33, and Billy Joe Saunders, 32.

And he even has space for YouTuber-turned boxer Jake Paul, 25, who has become one of the sport’s most polarising figures.

Hatton, 43, told talkSPORT: “I don’t know if it’s good for boxing, but I think we’ve all got to come around to the [new] way of thinking. 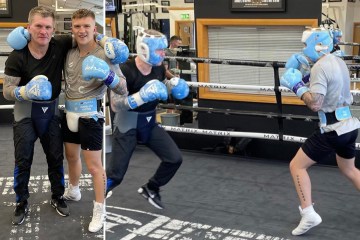 “Our game, boxing, years ago we moaned there were too many belts and too many weight divisions.

“Now, it’s mixed sports and mixed weights. I wouldn’t want to spar with Eddie Hall for Gods’ sake, but Jake Paul, I’d do a few rounds with that k***.”

Hatton is one of the most celebrated fighters from UK shores and lost only three times in 48 fights.

Two of those were against all-time greats Floyd Mayweather, now 45, and Manny Pacquiao, 43.

But the final fight in his career came two years after defeat to Pacquiao, losing to Vyacheslav Senchenko in 2012.

Now, he prepares for a comeback against Mexican icon Marco Antonio Barrera, 48, who retired in 2011.

Paul meanwhile, is 5-0 as a boxer and is set to return in New York’s iconic Madison Square Garden on August 6.

Previous post N.Y.C. Tried to Fix High School Admissions. Some Parents Are Furious.
Next post Fairfax parents react as board votes on punishments for student ‘misgendering’: ‘Compelling them to speech’