Delaware Republicans held their state convention at the Rehoboth Convention Center, where Biden himself had spoken a day earlier in the same room to address May’s jobs report.

He was still at his residence in the city when the convention was taking place, and Republican delegates and candidates took the opportunity to march by the convention center, and later toward the beach itself, chanting “Lets Go Brandon” — an anti-Biden slogan — and waving flags and banners. Some beach goers chanted along or beeped their car horns in support, while others expressed their disapproval at the display.

Delaware is a Democrat-dominated state, with the party holding both Senate seats, the state’s sole House seat, majorities in the state House and Senate. The state attorney general is also a Democrat.

But GOP candidates and party members sense a shift in the atmosphere in the First State, and are increasingly optimistic about making gains in November and turning the state a deeper shade of purple as they say the U.S. and the state are struggling under the leadership from Delawarean Democrats.

Lee Murphy, who was nominated again Saturday as the Republican candidate to challenge Rep. Lisa Blunt Rochester, D-Del., in November, said he believes things have changed dramatically since he last ran in 2020. 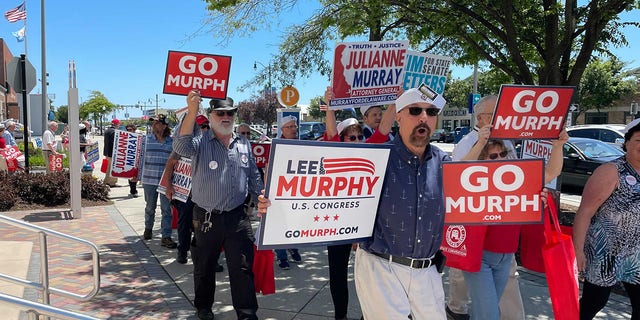 “This time, what I’m finding is this is a referendum on Joe Biden, and it’s not good the popularity you see across the country. It’s in the 30s some place and it’s just as low in his home state — people aren’t happy.” 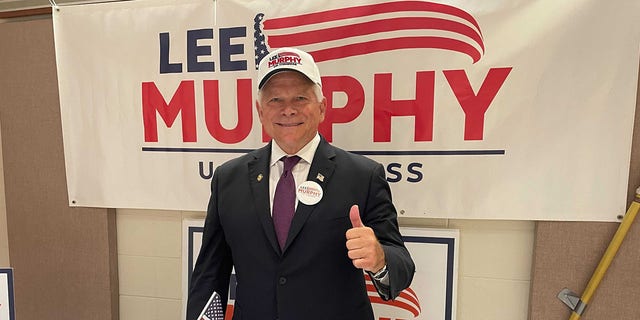 Republicans also picked the nominees for U.S. Congress, attorney general, state treasurer and state auditor on Saturday. Murphy was greeted enthusiastically by the hundreds of attendees at the convention, but faces a tough challenge in November. Blunt Rochester won the race with 57% in 2020, with Murphy picking up 40%.

But he said Republicans are motivated, and are finding that the economy, including rampant inflation and sky-high gas prices, are now major issues for Delawareans.

He acknowledged that running as a Republican in a blue state is a “tough mountain to climb” but said that the election was bigger than political parties.

“It’s not about party, it’s about saving our country as we know it,” he said.

Republicans are particularly excited about the race for state attorney general, where nominee Julianne Murray, a trial lawyer who ran for governor in 2020, is facing off against current AG Kathy Jennings. Murray is painting her opponent as soft on crime amid concerns from voters about rising crime in the state.

“When I’m talking to people, I say: ‘Are you safer than you were four years ago? No? OK, November you can do something about it.'” It’s definitely resonating with people,” she said. 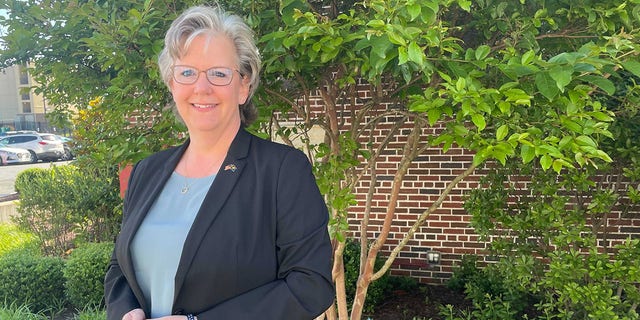 She, too, senses an opportunity in a year when Democrats are struggling, telling Fox that “if there’s a year, it’s this year.”

“Particularly, this is a midterm, so it’ll be interesting to see what happens with voter turnout. Typically, in a midterm turnout’s not as high, but I think people are engaged,” she said.

She also said there was a shift away from Biden among many Delawareans, including those who don’t identify as either Republican or Democrat.

“We have about 350,000 registered Democrats, 200,000 registered Republicans and 175,000 unaffiliated,” she said. “It’s a very, very large group, and that unaffiliated group is the one where we’re seeing the most drastic shift out of favor with Biden and more toward the middle to right.”

Republicans who spoke with Fox News Digital almost unanimously put the economy at the top of their list of priorities, but also mentioned election integrity, COVID-19 mask mandates in schools — which reappeared briefly in the state in the winter — and gun rights as top issues.

In the state legislature, where candidates are hoping to chip away at Democrats’ majority, Democrats are currently looking at passing a sweeping package of gun control measures, including proposals like an assault weapons ban, that have failed in the past.

Kim Petters, a military veteran who is running a primary challenge against a Republican state senator, pointed to the fight over gun control as one of the areas where a minority Republican Party has been able to rally Delawareans — describing how she led a team to knock on doors in Democratic legislators’ districts the last time gun control legislation was before the assembly. 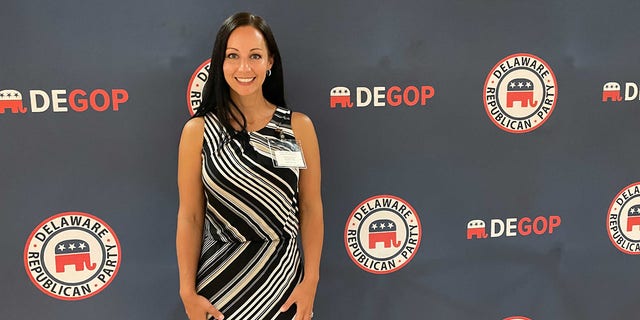 June 4, 2022: Kim Petters, a military veteran, dismissed the idea that Biden was popular in the First State. (Fox News Digital)

“In my opinion, how we get things done being the minority part of the state is we have got to rally the people, we need the people behind us,” she said.

She also dismissed the claim that Biden was popular in his home state.

“The idea or notion that Delawareans favor or love President Biden is absolutely false, in fact we don’t even like it when he comes to visit — we call them ‘Joe Jams’ because we’re all stuck in traffic,” she said. 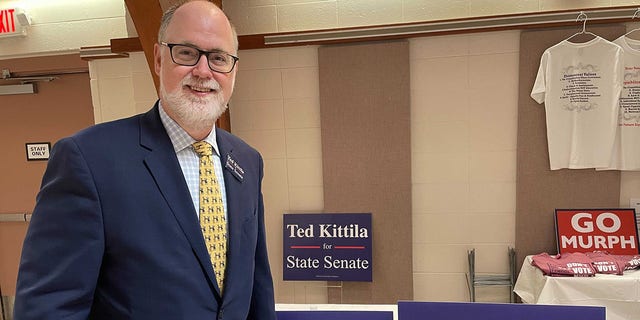 Ted Kittila, also running for state Senate, said that 2022 marks “the best opportunity that we’ve had in this state for a long time.”

“Our view is that this is the most vulnerable any Democrat has been in the state partially because of Biden, so it’s an easy sell for me,” he said. “When I go door to door, I represent change, I represent an opportunity for somebody to actually make a statement that they believe there is a different way to do things in this country.”

Previous post Archive 81: Will there be a second season of the Netflix show?