JEOPARDY! fans were shocked after current champion Ryan Long shared he was snubbed from a major title.

The gameshow’s previous streak-holder Mattea Roach scored it during her run.

But fans couldn’t believe he was snubbed from a title that Mattea Roach, whose winning streak ended last month – was handedCredit: NBC

The current Jeopardy! champ has won 16 games as of June 6th and now has the ninth-longest regular gameplay streak ever.

People are loving the broad-shouldered brainiac’s humble Q&A tidbits – especially the one about his son that made host Mayim Bialik nearly weep – consistent category sweeps and moving backstory.

But he admitted to hitting a speed bump off-stage many felt that didn’t make sense. 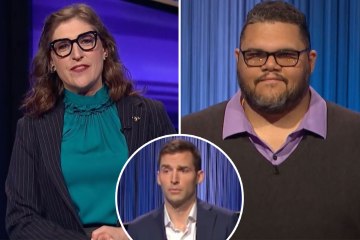 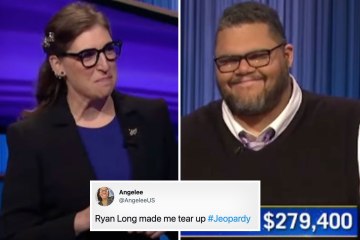 Ryan – whom many are calling their “favorite player ever” – took to his ever-active Twitter account over the weekend.

He shared he requested and was denied, to be verified.

The sought-after blue checkmark is an accolade similar to getting a Wikipedia page.

“Welp. So much for that blue check mark, I guess,” he tweeted alongside a screengrab of Twitter’s message, which did not offer much reasoning, many felt.

“We’re not able to review your application or offer more information,” it read, in part.

Ryan ammended with a laughing tears emoji, “It’s really OK lol… The only truly concerning thing in this pic is how much I need to charge my phone.”

But the snub was surprising since Mattea, the Canadian tutor who tore through 23 games just last month – got just what he was denied.

More than 100 users replied to Ryan’s news and even accused Twitter of giving him a shady automated reply.

“Can we do anything? This is wrong,” one wrote.

“@verified this is a no brainer. Give the man his check mark,” wrote another.

“I see that Mattea did not have until May 4th – you are getting close,” wrote a third on the champ cruising closer to the former winner.

Mattea tweeted asking for her checkmark in the casual style of a Lorde song after her 21st win – which Ryan is now five games shy of.

She posted, “(to the tune of Green Light) I’m waiting for it, that blue check, I want it.” and was given the “Green Light” one day later.

“I guess you’ll have to catch Mattea,” wrote a fourth.

Though other fans agreed, “That’s some BS.”

As one fan added, “My sister and I talk about you literally every day to check and see if you won. … Feels pretty blue checkmark worthy to me.”

Another accused on the response he got, “Their message could not be more confusing. They’re sorry, they’re not able to review your application. Applications are reviewed by a person on their specialized team. So is the person on vacation? This message is so convoluted.”

Ryan is certainly driving towards Mattea – who holds the fifth-longest streak on the show, ending in a blaze when she lost by $1 last month.

Her streak was nearly all hosted by Ken Jennings, while actress Mayim has been front-seat for Ryan’s entire stretch.

Ryan is extremely online during gameplay, more than she was – posting from his growing page that he forgot his glasses in Philly during his first week of wins.

He tweeted, “In case anybody’s wondering why I’m constantly squinting and adjusting during the game…it’s because my glasses are 3000 miles away, where they will do the most good.”

He also shared the wardrobe department was “mixing and matching” his two dress shirts, giving them a kind “shout-out.”

He later tweeted as fans have noticed some fog amid his clear victories: “Aslo, while I’m here, let me settle this once and for all…it’s fog. I’m definitely getting a new pair of glasses. So, new shirts. New glasses. On the list. #jeopardy.”

Off-line, Ryan has made it clear his near-$300K will change his life, as the two shirts and two vests were all he could afford.

He told The Philadelphia Inquirer that his father died before the start of his senior year of high school, which he “barely” graduated from.

In January 2021, he was hospitalized for several weeks after contracting COVID-19 – and could no longer work his public bus driving job.

He began driving for various rideshare drivers to provide for his eight-year-old boy Nathan, who made his bead necklace.

He was living paycheck-to-paycheck for more than a year before flying to Culver City.

Mattea, Ryan, and Amy Schneider, Matt Amodio – all from this stunning season – will compete in the Tournament of Champions in November.

Matt – who won 38 games in 2021 – seemingly did take a while to get verified too, tweeting after his go, “Does anybody know how to make Twitter’s ‘blue check’ process go slower? I’m worried mine will be done before #Jeopardy Season 3,141,592 airs.”

Some other users felt Mattea was favored since the tattooed 23-year-old tutor got a lot of coverage even by the middle of her streak.

The 5-game cap which required champs to bow out after winning as many games was lifted in the early 2000s, but no season has seen as many streak-holders as this one.

“I’m handing the keys back to the talented actor-producer-writer-director (!) Mayim Bialik for a few months,” adding, “We are lucky to have her! I’ll be back before the end of the season.”

Twitter has been a major source of information for fans – they used it to sleuth out Ken’s whereabouts since, including a trip to Hawaii and some home time with his wife and two children in Washington.

Many fans prefer Ken since he famously won the most games of Jeopardy! in 2004 and seems like the natural successor to Alex Trebek

Mayim has made some Q&A jokes that raised eyebrows, an off-color joke about marijuana last week, and also seemed to misunderstand the legacy of the band Queen – but has also grown on plenty of fans despite Ken’s closer alignment to the show.

Ken and Mayim began filling in for the legendary Alex after his tragic 2020 passing and a fleet of Season 37 celebrity guest hosts, including now-disgraced Mike Richards.

The fact that the hosting slot is still undecided has been a huge point of discussion, as the late Alex had hosted since 1984.

As another fan tweeted recently, “I actually like both Ken and Mayim, so that’s that, at least for me,” though one more replied that the 74-game and Greatest of All Time winner, given his resume, is still a “better fit for the show” between them.

The permanent hosting slot will be decided by the end of Season 38 in July 2022 – Ryan will go for his 17th win tonight.

Jeopardy! fans were shocked that Ryan Long was denied a Twitter check mark with ‘no reason’ given – while the previous streak-holder Mattea Roach got hersCredit: Twitter

Mattea asked and received verification during her 21st game, of which Ryan is just a five wins shyCredit: TWITTER/ @mattearoach

The Uber driver with nearly $300K and 16 wins might, however, benefit from a cover photo changeCredit: Twitter

Previous post McDonald’s Is Back, Moscow Style, as Russian Economy Stumbles On