MANCHESTER UNITED and Tottenham have been put on RED ALERT as Juventus CEO Maurizio Arrivabene has confirmed Paulo Dybala WILL leave the club.

Dybala’s deal at the Old Lady expires this summer and he was left unhappy with renewal terms put before him.

The latest news will be music to Manchester United’s and Tottenham’s ears, with the Premier League duo both being long-term admirers of the Argentine.

As quoted by Tuttomercatoweb.com, Juve CEO Arrivabene confirmed Dybala’s exit this summer, with the player no longer in the club’s long-term plans.

January signing Dusan Vlahovic is instead seen as the future of the Italian giants.

Arrivabene said: “The most important change is that Juventus have not renewed Paulo Dybala’s contract. 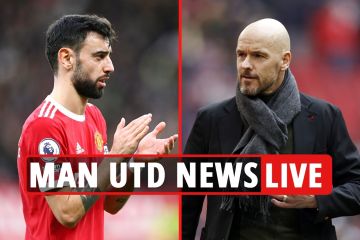 “With the market I reiterated this, the approach was sincere.

“With the purchases made in January, with the arrival of Vlahovic, Paulo’s position was no longer at the centre of the project.

“That’s why this kind of decision was preferred.

“The parameters were different, I had already spoken about it, no one has ever questioned Paulo’s ability.

“The decision is made. Today’s meeting was friendly, clear and respectful.”

This comes after Dybala and Juan Cuadrado got involved in a training ground dispute with Juventus manager Massimiliano Allegri, according to Gazzetta dello Sport.

United will likely need to bolster their attack in the summer as Edinson Cavani’s contract is running out and Anthony Martial asked to leave the club before being loaned out to Sevilla.

Club legend Cristiano Ronaldo has also been linked with an early exit from Old Trafford following the Red Devils’ struggles this season.

Juventus star Paulo Dybala has been linked with Manchester United and TottenhamCredit: Getty

Tottenham have been major admirers of Dybala and came close to landing him in 2019.

A £65million move collapsed after Juventus had a sudden change of heart and opted to keep him.

In fact, the Argentine had already agreed personal terms with the North Londoners before the Old Lady pulled the plug.