MANCHESTER UNITED could make a shock swoop for Roma striker Tammy Abraham after missing out on signing Darwin Nunez, according to reports.

The Red Devils were prepared to hijack Liverpool’s bid for Nunez, 22, however, it was claimed that the striker preferred the idea of a move to Anfield.

Man Utd had attempted to sign Nunez, however they lost out to LiverpoolCredit: AFP

Now they could attempt to sign Abraham from RomaCredit: Reuters

Jurgen Klopp’s side have now reached an agreement with Benfica for Nunez who will become the club’s most expensive signing at £85million.

Man Utd fans and officials have been left disappointed by the development, and are expected to turn their attentions to alternative options.

And according to football journalist Alex Crook, they could consider an offer for ex-Chelsea star Tammy Abraham. 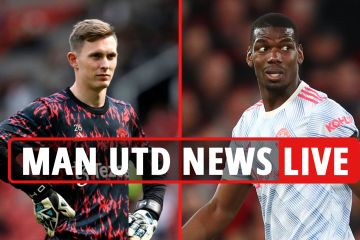 When speaking on the TalkSport GameDay podcast, he said: “I’ve just got a suspicion they might try and get Tammy Abraham out of Roma.

“He was someone that I think they looked at in January.

“As I’ve mentioned, we interviewed Tammy on Darren Bent’s Boot Room and he seemed very settled in Italy but Roma aren’t in the Champions League and nor are Manchester United.

“I think eventually he will want to come back to the Premier League. The question again is: Are Manchester United an attractive enough proposition for him?”

Abraham joined Roma from Chelsea last summer for a transfer fee of £34million.

During his first season in Italy he scored 26 goals in 52 appearances across all competitions.

He also played a vital role in helping the Yellow and Reds to the Europa Conference League title.

But while the 24-year-old appears to be settled in Italy, Roma boss Jose Mourinho has given him the green light to return to England whenever he wishes.

He has previously been linked with a move to Arsenal, but the Gunners have now made Manchester City’s Gabriel Jesus a priority signing.

New Man Utd boss Erik ten Hag is said to be on the hunt for a new striker to replace Edinson Cavani, who will leave Old Trafford when his contract expires at the end of this month.

The Dutchman is looking to completely revamp the current United squad so Abraham, who is in prolific goalscoring form, could prove to be the perfect addition.

Next post California exodus: Remote workers move to Mexico due to sky-high gas and housing costs