MANCHESTER UNITED look set to miss out on Nikola Milenkovic – because West Ham have a “gentleman’s agreement” to sign him, according to reports.

The Fiorentina centre-back, 24, has been at the centre of a transfer tug of war.

Nikola Milenkovic has proved himself against Serie A’s top attacking talent and could move to England this summerCredit: Getty

A whole host of Premier League sides have been linked with the defender in recent seasons.

Tottenham, Newcastle, Wolves and Arsenal were among them, as well as United and West Ham.

Fiorentina’s Serie A rivals Inter Milan could also be interested, six months after his Serbian compatriot Dusan Vlahovic made the same switch.

However, Milenkovic signed a contract extension last summer, tying him down until 2023. 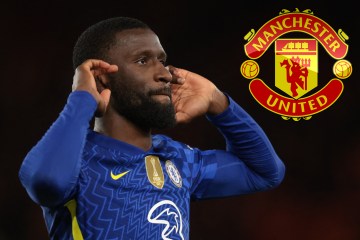 But the one-year deal was signed to appease both parties, with Sport Witness claiming there is a “gentleman’s agreement” allowing the 32-cap international to leave at the end of this season.

A “reasonable” offer of as little as £13million is said to be sufficient to convince Fiorentina to let him go.

However, the report does add that Milenkovic staying at I Viola “isn’t completely ruled out”.

The defender joined Fiorentina from Partizan Belgrade in 2017.

He has racked up 155 appearances and even added 14 goals as well as securing himself as a regular in the national team.

But his only silverware remains the Serbia SuperLiga and two Serbian Cups from his time with his boyhood club.

Should United miss out on Milenkovic who looks bound for the London Stadium, they may look elsewhere in their pursuit of defensive reinforcements.