WASHINGTON, DC—March for Our Lives attendees told Fox News Digital what they want to see happen to make kids safer in schools following the deadly mass shooting at an elementary school in Uvalde, Texas, saying the change needs to start in Washington.

Several of the attendees who spoke with Fox Digital worked in education. Susan, a teacher from Montgomery County, Md., who supports gun control legislation, listed a few of the specific items she’d like to see passed in Congress.

“I think the best step is for legislators to enact gun control legislation so that the schools can do what schools are meant to do, which is to teach children,” she said.

“I believe in banning all assault style weapons,” she continued. “But if that’s not possible in today’s congressional climate, I believe in expanded licensing regulations, raising the minimum age for purchases, waiting periods for purchasing, and just a lot more oversight on who can have guns and how they store them, and how they can use them.”

Another rally-goer from McLean, Va., who also works in a school, said the United States “really has it wrong” on guns. Asked what schools can do to protect students, she, too, pointed the finger at lawmakers.

“I’m more concerned about what the government should do,” the attendee said. “I think schools are doing a lot of things in their power to protect children. We’re all in schools because we care about kids.”

Melanie from Arlington, Va., attended the rally with her family, carrying a sign that read, “The Gun Lobby Is Making a Killing on Gun Sales.”

She spoke in favor of universal background checks. She was one of several attendees who also rallied for red flag laws, which restrict people the government determines are mentally ill or pose a threat to public safety from having guns. 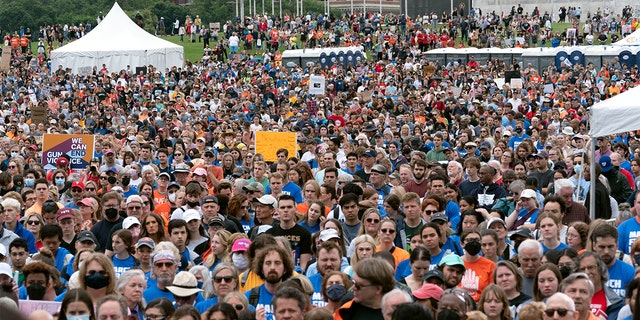 “My kids don’t feel safe,” Melanie said, adding that she was emotional. “They were afraid to come here today. They were afraid that someone would target the march itself. And I think that that’s a scary place for our kids to be growing up, and I think something’s got to give.”

Danielle, from Virginia, who was wearing a Moms Demand Action T-shirt, said it was “crazy” to her that 18-year-olds can buy assault rifles, but not alcohol.

“And I believe assault rifles should be the age of 21 to get them,” she said. “You can’t buy beer legally at the age of 18, but you can buy assault rifles, and that just seems crazy to me. And I want to change that. I want red flag laws and I want commonsense gun reform.”

Asked how to keep kids safe in schools, she replied, “by raising the age limit for assault rifles to 21.”

Erin from Silver Spring, Md., a midwife for 30 years, said she was “horrified about the way life is being taken out of the world, that babies are being murdered in their classrooms.”

“Children instead of learning at their desks are having to hide under their desks,” she said, while wearing a t-shirt from the six-month anniversary of the 2012 shooting at Sandy Hook Elementary School in Newtown, Conn.

“The best way to protect kids in schools is to regulate guns,” she agreed with other participants. “That if people had to get a license for any gun, if they had to have training on any gun, if they had to be assessed for their mental capacity to correctly use that gun, then our children wouldn’t be dying. At least they wouldn’t be dying in the numbers that they are.”

Erin advocated for funding efforts to promote mental health, but said, “It’s not mentally ill people who are the big problem. It’s the guns.”

In addition to promoting the passing of red flag laws, she wanted to see the introduction of a national registry and, if not possible to ban assault rifles, then to at least get them licensed.

Navin, from Washington, D.C., said “on the margins” there are things schools can do to protect students.

“But as long as people can get access to guns so easily, I don’t think much of that will matter,” he said. “Not really dealing with the real problem.”

Kelsey Koberg is an Editor with Fox News Digital. Story tips can be sent to [email protected] and on Twitter: @KelseyKoberg.