A “MONSTER” tornado ripped through parts of Texas, tearing off roofs and tossing cars around during a severe weather warning on Monday.

A warning was issued in Central Texas on Monday afternoon with much of the Austin metro area facing a level 4 out of 5 risk.

A tornado caused major damage to a high school in JacksboroCredit: FOX 4

The roof of the school partially collapsed, filling the gym with debrisCredit: FOX 4

A tornado caused major damage at a high school in Jacksboro, according to the fire department.

The gymnasium at Jacksboro High School was hit directly, reported NBC 5, but all students are safe.

The roof of the school partially collapsed, filling the gym with debris. Damage was also done to the football field.

School officials were warned ahead of time and were able to get all staff and students at the high school and Jacksboro Elementary School to storm shelters. 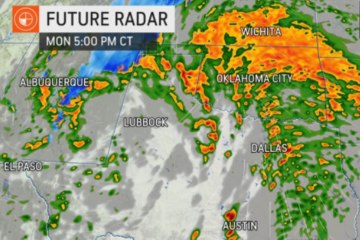 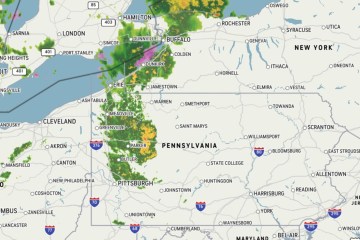 An animal shelter in the area was also significantly damaged by the storm.

Police confirmed a tornado on the ground around 4pm after a tornado warning was issued for north Texas, according to WeatherNation.

Damage was reported to nearby mobile homes and trees, the National Weather Service in Fort Worth said.

Video of the storm all over social media showed multiple downed trees and damaged buildings.

In Round Rock, temporary shelters were set up due to the severe weather. Tornadoes were spotted on the ground near the I-35 and I-45 intersection.

Downed power lines caused outages in multiple counties. More than 18,000 customers were without power in Williamson County and 5,000 in Travis County.

Structural damage has been reported to multiple homes and businesses, said Round Rock police. Greenlawn Boulevard has been shut down between Gattis School Road and Dell Way because of debris on the road.

According to city officials, no major injuries were reported.

Downed power lines caused outages to many homes in the stateCredit: Reuters

Temporary shelters have been set up in Round Rock for people to find refugeCredit: KXAN

Multiple homes and business were severely damaged by the stormsCredit: EPA