THE West must not give Putin an inch, any more than the Allies did Hitler.

That means backing Ukraine’s President Zelensky all the way in his refusal to surrender — and giving him every tool to defeat this heinous enemy.

Nato must back President Zelensky and Ukraine unwaveringly with our words, sanctions and weaponsCredit: AFP

Joe Biden has little appetite for foreign conflicts, as he showed long ago over Vietnam and with his shambolic retreat from Afghanistan last year.

But it would be folly for Nato to be thinking already, or at all, of pressurising Zelensky into ending the war by handing Putin some form of victory.

To hell with that.

For Ukraine to offer anything beyond its promise not to join Nato, which is not on the cards anyway, would reward the monster for genocide. 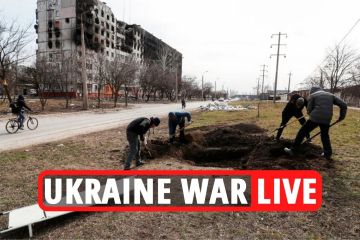 For all our sakes it must not happen.

Putin must be defeated, then ousted.

The theory that he needs an “exit ramp”, a way to back off but retain credibility at home, is flawed.

He has no PR problem in Russia, no need to “sell” a victory.

Despite our punishing sanctions, most still swallow whatever Putin tells them, such is his stranglehold on the media there.

Russians dismiss as bogus the video proof of slaughtered civilians sent to them by distressed Ukrainian friends.

They even accept the absurd lie that the apocalyptic levelling of Mariupol is the work of mythical Ukrainian Nazis.

Putin could tell them anything.

Only Russia’s defeated soldiers returning home with the truth might change that.

He, not the West, must determine Ukraine’s fate.

Nato must back him unwaveringly. With our words, sanctions and weapons.

FEW would envy a Chancellor tasked with balancing the books after borrowing a staggering £400billion during Covid.

He can read their experiences opposite.

At tomorrow’s crucial mini-Budget Mr Sunak must cut fuel duty by at least 5p a litre.

That will make some difference, but not enough.

The Sun would also like VAT and green levies slashed on energy.

And we again urge the Chancellor to rethink whether the worst economic squeeze in a generation is the right moment to raise National Insurance.

It isn’t, of course.

But if Downing Street insists it cannot be avoided, Mr Sunak can at least tweak income thresholds to spare the lowest-paid.

Don’t let us down, Rishi.

Brenda McCossick was left with the shock of her life after her latest energy bill said she owed £1,960,083,072Credit: Tom Farmer

Gas is a bit more, at almost £2billion.

We didn’t think the price cap went up until April.