Bob Barnes, the man who is cycling to every U.S. state capital in one year, had a major mishap in Michigan.

Barnes, 52, of Syracuse, New York, burned his tent down a few days after he visited Lansing, Michigan — which was capital no. 38 for him.

On the night of April 25, Barnes had set up camp in Battle Creek, almost 50 miles outside of Lansing. Before he turned his propane stove off, Barnes fell asleep — and then kicked it over during the night.

“I was surrounded by fire when I woke up,” Barnes said.

“I immediately knew what I did.” 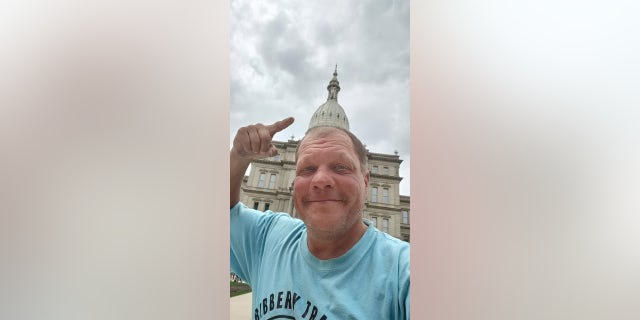 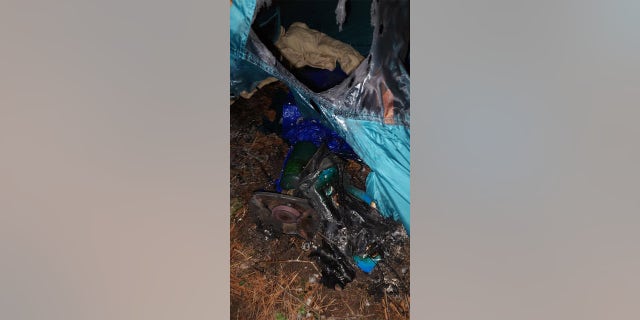 Just one night after leaving Lansing, Barnes fell asleep with his propane stove still on. During the night, he kicked it over — and it burned down his tent (pictured).  (Bob Barnes)

When he realized what was going on, Barnes had one mission: “I had to get out of the tent.”

“It wasn’t hard … [the tent] was all burned up,” Barnes said. “There was nothing there.”

Barnes said he made it out safely without even a singe. “I can’t believe I didn’t get burned,” he said. “The fire was hard to put out.”

“I was surrounded by fire when I woke up.”

“There was a point where I thought the woods were going to catch on fire,” he continued.

Barnes managed to put the fire out using his gallon of drinking water. At that point, he decided to go back to sleep.

NEW YORK MAN BICYCLING ACROSS US REVEALS HIS FAVORITE STATE SO FAR: ‘FEEL AT HOME’

“In my head, I was like, ‘I’ll deal with this in the morning,’” Barnes recalled. “I was like, ‘There’s nothing else I can do. I might as well get a couple of hours of sleep.’”

As he went back to bed, Barnes said his campsite was wet and sooty and the stuffing from his sleeping bag was everywhere.

“It was disgusting,” he admitted. 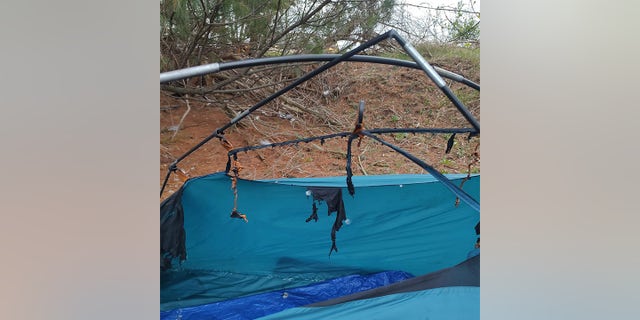 Barnes was able to put out the fire with his gallon of drinking water. (Bob Barnes) 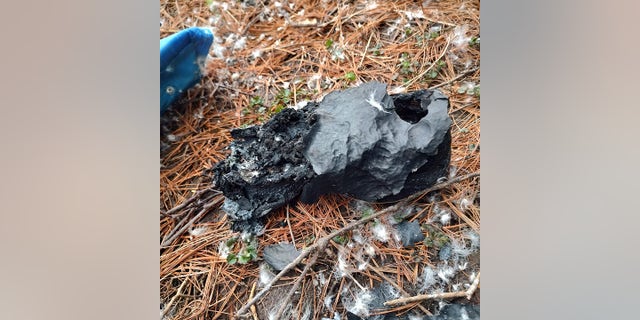 Unfortunately, Barnes’ gear including his tent, sneakers (one is pictured here), sleeping bag, coat and stove were all destroyed in the fire. (Bob Barnes)

In the morning, Barnes took stock of the damage.

Though he got away without any burns — his gear wasn’t so lucky. His tent, sneakers, sleeping bag, coat and stove were all destroyed in the flames.

After breakfast at a McDonald’s, Barnes rode to a nearby Walmart and bought all new gear.

“That helped, just to force myself to take care of the situation and move forward,” Barnes said. 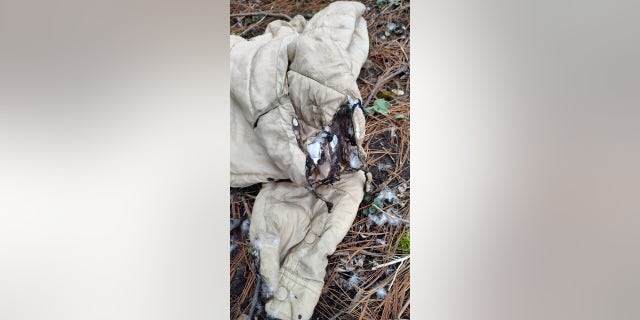 Barnes said his campsite was “disgusting” after the fire — but he grabbed a few more hours of sleep and decided to deal with the issue in the morning. (Bob Barnes) 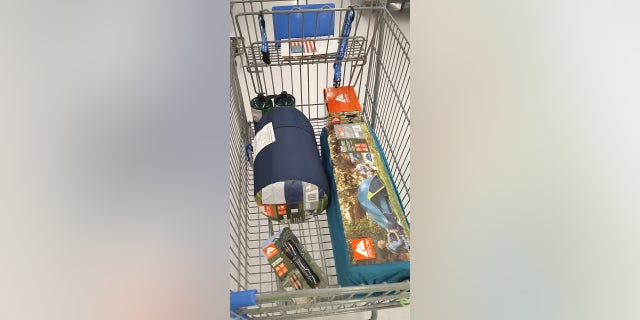 Barnes was able to buy new gear the morning after the fire, which he said helped him move forward from the unfortunate incident.  (Bob Barnes)

As he’s continued cycling from state to state, Barnes has been able to put the incident behind him, he said — though it still shocks him to think about it.

Within a quarter-mile of crossing into Michigan from Indiana on April 23, Barnes was met by another bull.

“He was a little one, so I was going to take my chances and go by him,” Barnes said.

Previously, when Barnes was in Kentucky, he also came across a loose bull, which he described as “one of the biggest creatures I’ve ever seen.” 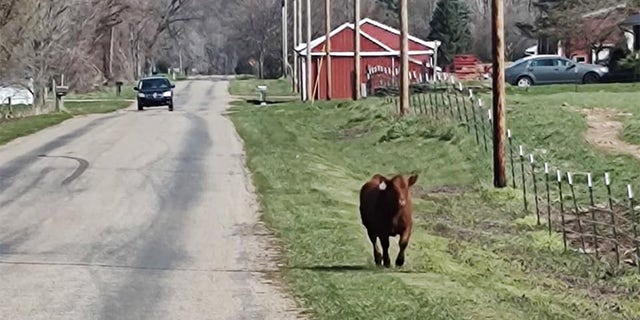 Almost as soon as Barnes arrived in Michigan, he was met by another bull on the loose — he’d previously come across a bull in Kentucky. The bull in Michigan was smaller and less intimidating, he said.  (Bob Barnes)

As Barnes was taking photos of the smaller bull in Michigan, an Amish man on a tractor drove up to Barnes and told him the animal belonged to him.

“It was probably one of the most interesting and fun interactions with anybody I’ve had the whole trip,” Barnes said. “He was just this friendly, big-smile Michigan guy.”

The man asked Barnes about his cycling trip, his bike and his solar panel — which powers Barnes’ phone and sits on the trailer that Barnes pulls on his bike.

“He was very inquisitive,” Barnes said. “He just kept asking me questions.” 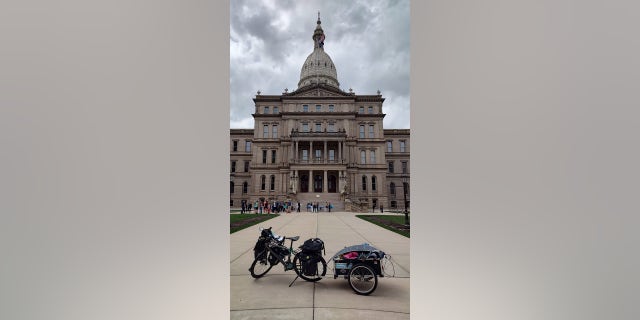 While Barnes was in Lansing, he met up with a couple he previously encountered in Ohio.  (Bob Barnes) 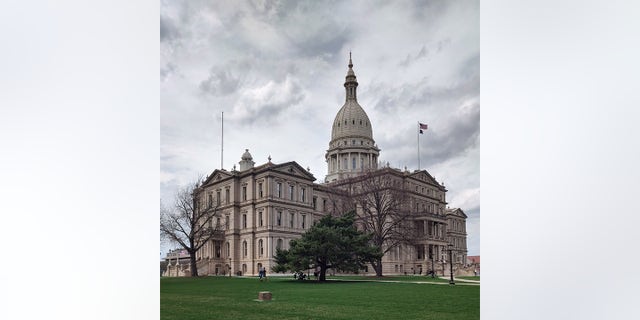 Barnes was also able to meet with another couple in Michigan who treated him to dinner and a hotel room.  (Bob Barnes)

The conversation ended when the man told Barnes he had to go home for a horse. The tractor was apparently too slow to catch up to the bull.

“That was a great interaction,” Barnes said.

“Michigan’s awesome,” Barnes said. “I have been in Michigan before and in both instances, it’s been the same experience. Michigan is very scenic. The people are awesome — it’s just a fun state.” 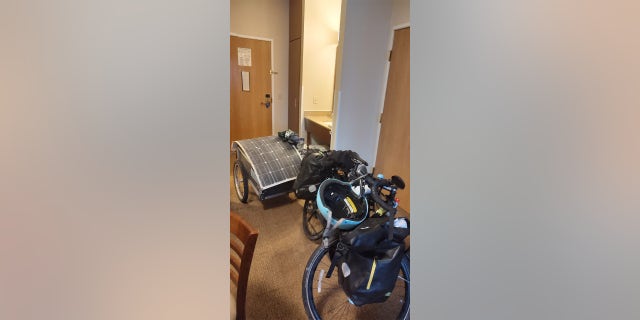 Barnes’ bicycle and trailer are pictured in a hotel room where Barnes spent the night in Michigan.  (Bob Barnes) 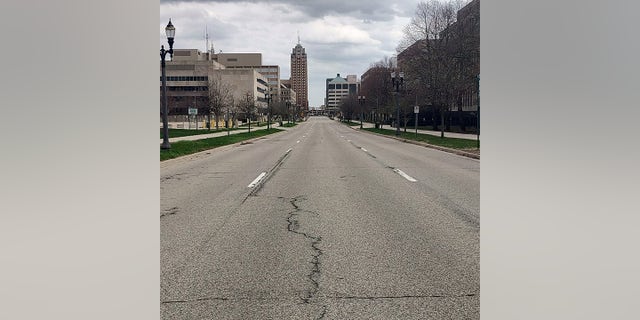 When Barnes visited Lansing, it was a Sunday — so he said the city was a “ghost town.”  (Bob Barnes)

While he was in Lansing, Barnes met up with a couple, Mike and Terri, whom he’d previously met while he was going through Ohio and they were zip-lining.

Mike and Terri are from Michigan, so they made sure to catch up with Barnes when he got to Michigan’s capital. They even donated to Barnes’ GoFundMe page.

“I meet people I’ve never met in my life and we just have a ball.”

Barnes said they were the first people he’s met on the cycling across America trip who followed up with him later.

“That was really cool, the way that played out,” Barnes said.

After his tent burned down, Barnes said they even offered to bring him a new tent, though by that point he’d already bought a new one. 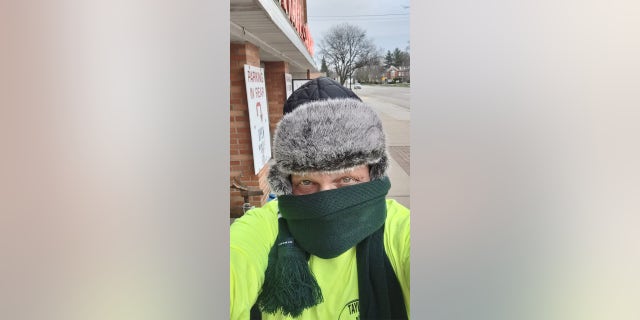 Barnes told Fox News Digital that he struggled with the cold weather in Michigan. “I let my guard down as far as the weather goes,” Barnes said.  (Bob Barnes)

Barnes also met up with another couple, John and Linda, who treated him to dinner and to a hotel room for one night.

“That was awesome,” Barnes said. “These interactions are so … natural. It’s like, I meet people I’ve never met in my life and we just have a ball.”

Aside from burning his tent down, Barnes had one other hurdle to overcome in Michigan: backtracking, or riding back over the same route a second time.

Barnes sometimes has to backtrack when he leaves capital cities if there’s only one route he can take on his bicycle to get to the next capital, he explained.

When he was in Kentucky, Barnes shared with Fox News Digital that cycling through areas he’s already been though requires “mental toughness.” 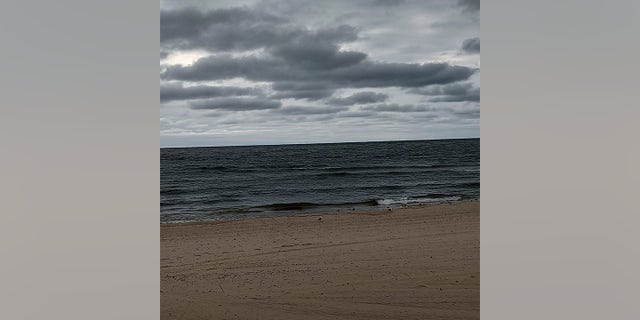 “Michigan is very scenic,” Barnes told Fox News Digital. “I can’t say I’d live there because the winter drags on, but I could live there in the summer. It’s a beautiful state,” he said — and referenced Lake Michigan (pictured). (Bob Barnes)

When he left Lansing, Barnes had to backtrack again, cycling back over 40 miles.

“It gets in your head a little bit,” he added.

Barnes also had to deal with cold weather and wind in Michigan.

“I let my guard down as far as the weather goes, because I didn’t think it’d be this cold in the spring,” Barnes said. 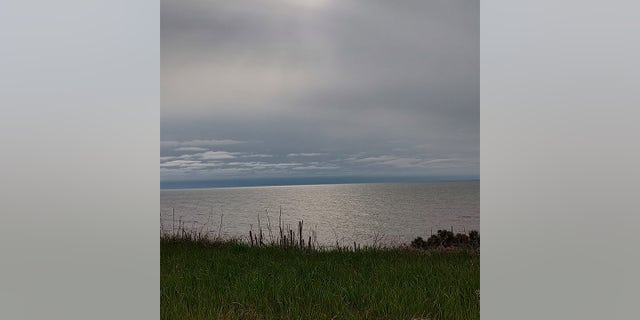 Barnes said he especially loved riding along Lake Michigan (pictured) because the scenery was just so beautiful.  (Bob Barnes)

Despite the challenges, Barnes said he loved the scenery in Michigan, especially as he rode alongside Lake Michigan.

“Michigan is very scenic,” Barnes said. “I can’t say I’d live there because the winter drags on, but I could definitely live there in the summer. It’s a beautiful state.”

Next stop for capital no. 39: Illinois

After visiting Lansing, Barnes went back through a portion of Indiana on his way to Illinois and capital no. 39 on his list: Springfield, Illinois.

Once he visits each capital of the Lower 48, Barnes has explained that he plans to bike to Juneau, Alaska, after taking a ferry from Canada.

And he’ll bike to Honolulu, Hawaii, after flying with his bike to the island, he previously told Fox Television Stations.

Fox News Digital has been following Barnes’ journey across America and detailing it for readers in this unique Lifestyle series. To catch up on — or enjoy once more! — his previous three trips before the one described here, read more below:

NY man cycling to all 50 states faces bull on the loose in Kentucky: ‘Imminent danger’

NY man cycling across America falls in love with Cincinnati

Ann W. Schmidt is a lifestyle reporter and editor for Fox News Digital.