Not all interactions with police officers in America are negative — and for a group of students in Philadelphia, this one definitely wasn’t.

Philadelphia Police Officer John Brady was caught on video this week throwing a football outside with school kids while he was on his break.

In the video shared with Fox News Digital, the officer can be seen tossing the ball back and forth with multiple students — then finishing his break, getting back in his car and returning to work.

It was a nice, friendly, upbeat interaction — simple, kind and just worth noting.

But it’s the type of positive experience that isn’t often talked about or covered.

In a phone interview with Fox News Digital this week, Officer Brady said this wasn’t the first time he’s made a point of stopping during his break to have a positive interaction with kids in the community.

“If I’m going to trim half of my lunch [period] to go meet a kid, have a great interaction — and someday one kid won’t think twice about actually telling a cop when they need help or are just asking a question — then I did my job,” he said.

Officer Brady said the positive police exposure is good for the kids in this particular part of town.

He says he tends to patrol the lower-income housing areas of Philadelphia. 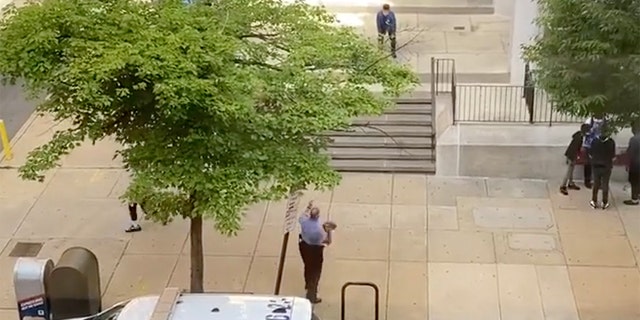 Philadelphia Police Officer John Brady is seen tossing a football with school kids while on his break one day this week. (Fox News Digital)

“We have a joke in the police department that says if you want to be liked, you should’ve been a fireman. Everybody loves a fireman, right?” he said.

“Cops are only there when they’re needed — but they don’t realize that we’re there for a reason.”

Brady said he’s been a police officer for 23 years.

He said that every time he gets a chance to leave a good impression on a kid — he tries to do so.

“I have conversations about what they [the kids] want to do,” he said.

Brady works in the sixth district of Philadelphia, where crime is rampant.

He said that many times, young kids will only interact with police officers when there’s a crime situation.