SOUTHERN Charm’s Kathryn Dennis has reunited with her children to celebrate her daughter Kensie’s eighth birthday.

The mom-of-two shared a photo of her with Kensie, and her son Saint, six, as she spent some rare time with the children amid the ongoing custody feud with her ex Thomas Ravenel, 59

Kathryn Dennis has reunited with her children to celebrate her daughter Kensie’s eighth birthdayCredit: Instagram

She is still locked in a custody feud with her ex Thomas RavenelCredit: NBCU Photo Bank/NBCUniversal via

In the photo, Kathryn, 30, looked radiant as both her children stood beside her and held her hand.

Kensie wore all-pink with a tiara, while Kathyrn smiled in rainbow ombre pants and a matching bra-top with puffy sleeves.

Meanwhile, Saint beamed adorably in a hockey jersey and shorts.

For the caption, Kathryn wrote: “Happy 8th birthday to my baby chica! 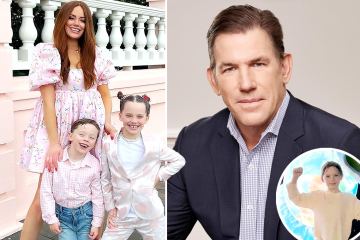 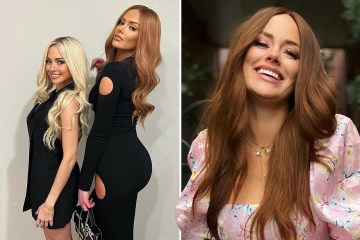 “We had a Limited Too inspired party. So many classics. We made lava lamps, friendship bracelets, and tie-dye scrunchies. Blowup chairs, flower pillows, mom pulled out all the stops. Just look at my baby girl with her American Girl doll, Samantha— the same one my mom got me.”

In the photo, Kensie clutched her doll.

She concluded: “It was a wonderful day. Every day with them is because I’m home.”

This update comes amidst the ongoing custody war between Kathyrn and her ex, Thomas, who is a disgraced politician.

Kathryn lost custody of the kids back in March last year.

Thomas accused his former partner of using drugs and neglecting the children.

She denied those allegations, though a court ultimately sided with former Treasurer of South Carolina, Thomas.

The mother of two has been candid about how difficult it has been for her to not see her kids every day.

Back in October 2021, Kathryn sobbed as she confessed that she was “missing her babies.”

She posted a photo of herself crying and wrote: “But some days it be like that.”

She also shared on Instagram: “There will be a lot more difficult times than good times when you are without your kids.”

Recently, Kathryn threw shade at her ex and slammed Thomas in a post on social media.

She had posted a quote that read: “You can NOT co-parent with a narcissist as they will COUNTER parent. This is NO reflection of you as a parent.”

The text continued: “When a narcissist can no longer control you, they still need to maintain a sense of dominance by controlling how others perceive you.

“This is often accomplished by initiating smear campaigns about you to back up their story.”

Despite the ongoing war between the two, Kathryn has been eager to update her fans with cute pictures when she does spend time with her children.

She now gets supervised visitation every other weekend.

Last month, she and the kids dressed up in matching pink outfits for a day at the museum.

Kathryn posted photos of Kensie and Saint hanging off the solar system exhibits.

And earlier this year, she shared a rare video of them feeding a puppy together.

Kathryn lost custody of the kids back in March last yearCredit: Instagram

She regular shares photos from the weekends she does spend with themCredit: Instagram / Kathryn Dennis

Next post At ‘Grief Camp,’ Kids Learn to Process Loss Together