TEEN Mom Chelsea Houska has revealed the dream bar she wants inside of her South Dakota farmhouse.

The former reality star has shared plenty of her renovations to the newly-built home she shares with husband Cole DeBoer and their children.

The former reality star has been sharing her renovations with fansCredit: Instagram / @downhomedeboers

On Friday, Chelsea, 30, shared a photo of some home inspiration on her Instagram Story.

The snap showed a leather couch similar to the one in Chelsea’s house, a round wood coffee table and more details throughout.

She also focused in the all-black bar area which featured a brick wall as a backdrop.

Chelsea wrote over the snap: “Been obsessing over this dream bar.” 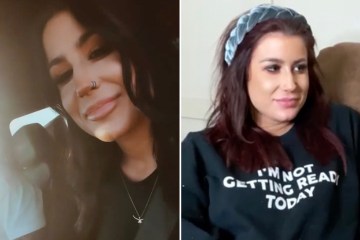 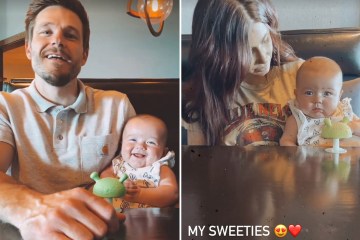 There is also light fixture hanging overhead that fans couldn’t stop talking about though.

The fixture featured a gold circle with large white bulbs around it.

While Chelsea has been slammed for her design sense, fans seemed to like the fixture she shared as well as the other elements.

“Where’s the couch from? I need it,” one commenter wrote.

Another added: “Gorgeous! What size chandelier is this?”

“Love the rug. Where is it from? Thanks,” a third fan wrote.

Chelsea didn’t say whether she was considering adding anything in the photo to her own home.

The former MTV star isn’t without controversy as of late, however.

The South Dakota native was recently slammed over the the apparent shade of her skin in recent posts.

She appeared darker than usual as she posted front-facing videos from her car.

She said: “So Cole and I are going out to dinner with our whole team.

“And it’s just been so fun so I’m excited to have a nice little night with everybody,” she boasted on Instagram Stories as she filmed herself with her long brunette hair down and tan-appearing complexion.”

One critic wrote on Reddit: “Oh god the splotchy self-tanner on her hand gave me middle school flashbacks of trying it for the first time.

Another added: “This is blackfishing and honestly most white influencers like Chelsea seem to be addicted to tanning to the point where I’m worried it’s body dysmorphia.”

Blackfishing is when someone pretends to be Black or another race by via the use of things like hairstyling and makeup.

In December 2021, Chelsea posted a picture of herself alongside her daughters, and fans were quick to point out that she appeared to be significantly more tan than her kids.

Another Reddit user wrote: “It’s weird how people are coming to her defense about her way too dark makeup color/skin color. I guess it rubs me wrong when white girls try so hard to look brown.”

A week later, she was compared to fellow MTV alum Farrah Abraham due to her seemingly darker skin.

Stars like Ariana Grande have also been accused of it.

While fans have questioned Chelsea’s design sense and slammed her skin tone, she continues pushing forward.

Chelsea has yet to address the accusations, as she has been busy prepping for her new TV show.

The couple announced their departure from MTV in 2020 but recently revealed that they will be returning to the small screen on a different network.

The duo scored a brand new show on HGTV called Farmhouse Fabulous, which will follow them as they help families renovate their homes.

The new venture comes months after they finished construction on their brand new South Dakota Farmhouse.

The couple has been busy renovating their South Dakota homeCredit: Instagram

Previous post The ‘Open Secret’ on Getting a Safe Abortion Before Roe v. Wade