TEEN Mom star Kailyn Lowry revealed she’s still in therapy because of the effects of filming her MTV show.

The admission comes as fans have been fearing that she was recently fired from the long-running reality series.

Kailyn Lowry admitted she’s still in therapy because of the effects of filming her reality seriesCredit: YouTube/ShrinkChicks

Fans have been fearing that Kailyn was recently fired from the MTV showCredit: MTV

While appearing as guests on the ShrinkChicks podcast on Monday, Kailyn and Vee Rivera opened up about how Teen Mom has affected their mental health.

For the former, she shared that she’s still working through things with a professional because of the intensity of the job.

She explained: “It’s really hard when we’ve gotten through things that were really hard in the moment and then we have to relive them on TV.

“And then maybe some of the same emotions came up when we originally went through it but then sometimes other emotions come up.” 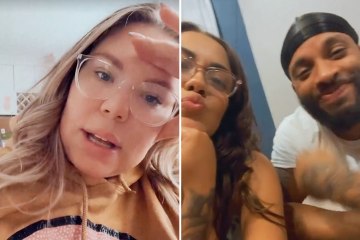 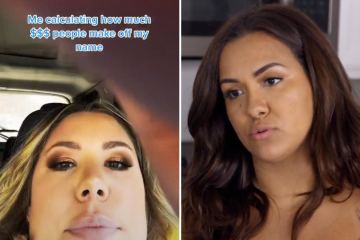 Kailyn continued: “And we’re like, ‘F**k, what is this? How do we get through this?’

“Reliving, like ripping a band aid off a wound that hasn’t healed yet, and it’s just not a good time.

“And, I mean, I think I’m in therapy still from filming.”

Vee, with whom Kail co-stars on the MTV show with and co-hosts a podcast with, jumped in to add: “Oh yeah, it’s hard.

“It’s not normal to be going through these things and then on top of that have a million people’s opinions on everything when your mind is going wild on its own.”

Recently, Kailyn admitted to being depressed in a heartbreaking message.

The Teen Mom 2  star tweeted: “Depression is kicking my a**.”

It is unclear what caused the MTV star to feel this way.

The star’s previous tweet had been a promotion of one of her podcasts, Barely Famous.

In an Instagram Story, Kailyn shared more of her feelings in a Boomerang clip of her in bed, captioning the post: “How I feel about the f**kery I woke up to.”

All this comes as fans have speculated that the TV star could have been fired from Teen Mom.

Amid the rumors, Kailyn reportedly has not filmed with the network in over six months.

One fan also noticed that Kailyn has unfollowed all but 11 people on Instagram, including her close pal Leah Messer.

Redditors opened up the discussion about the TV personality’s status with the MTV network and shared a screenshot of her follower count.

One said at the time: “Kail unfollowed everyone on IG, except for her kids and Chelsea [Housla]. She even unfollowed Natalie, Vee, Lindsie, etc. She is exhausting.”

Another user speculated: “Maybe she got fired and isn’t happy lol!” as someone else assumed: “Or she quit in a tantrum ‘It’s either me or Chris!’ and MTV called her bluff.”

However, the mom of four eventually re-followed some notables.

The Ashley Reality Roundup recently revealed that Teen Mom OG and Teen Mom 2 will reportedly be combined into one show.

According to the site, MTV producers have reportedly been hard at work trying to save the franchise.

However, sources told the publication that nothing has been finalized at this time.

The two casts combined would likely mean cuts amid the show’s rating woes.

Fans are now concerned that Kailyn will be one of the cast members let go.

Some of her followers claimed they found a clue that she’s been axed from her TV gigCredit: Instagram/Kailyn Lowry

Previous post Democrats Are Making Life Too Easy for Republicans

Next post Bill Maher: Today’s GOP ‘would be thrilled’ to have no Black justices on the Supreme Court