ERIK TEN HAG is favourite to become Manchester United’s new boss – after a set of dossiers was completed on all candidates.

The club have compiled exhaustive background checks on each of their possible targets, with the Ajax coach coming out well on top.

Erik ten Hag has topped the list of potential candidates for the permanent job at Man UtdCredit: Getty

The Dutchman and Pochettino were neck-and-neck in the raceCredit: Rex

Ten Hag and former Spurs boss Mauricio Pochettino were in a neck-and-neck race.

But after the club spent weeks putting together their dossiers, they now believe it is Dutchman Ten Hag who can be the manager for at least the next five years – and take United back to the summit of English and European football.

United want to be able to make an announcement before the end of the season so the new boss can hit the ground running ahead of a crucial summer of recruitment.

Thomas Tuchel had emerged as a shock new candidate for the job owing to the turmoil at Chelsea. 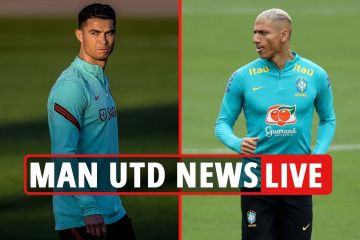 But United fear a potential takeover that could keep the German coach at Stamford Bridge would drag on through the summer.

That would leave them waiting and ultimately disappointed.

Current Red Devils manager Ralf Rangnick has been part of the process of identifying the new boss as he prepares to go into a consultative role at the end of the season.

United believe the appointment of Ten Hag, 52, will not only help attract players but also keep some of those whose future is up in the air.

There will need to be some negotiation with Ajax as his current contract runs until the end of next season.

Meanwhile, Liverpool legend Robbie Fowler laughed off suggestions from Gary Neville that Diego Simeone should be the permanent gaffer at Old Trafford.

Fowler said: “I laughed this week when I heard Gary Neville shouting that his former club should make Diego Simeone their next manager.

“Honestly. I’m not saying he’s anti-football, but some of the antics his team get up to, some of the horrible stuff they do, and the tactics they pursue. Not at Manchester United.

“The fans would be calling it out within weeks, and even if he actually won things with it, they wouldn’t put up with it for long.

“United have a certain expectation about how they should be playing, which was laid down by Sir Matt Busby and Alex Ferguson.”