EASTENDERS fans were in shock when they heard Stacey Slater drop the word ‘t*t’ before 8pm.

The exasperated Stacey (Lacey Turner) was venting about her mum Jean (Gillian Wright) who during a manic episode, had hired a jumping castle and blocked the street to jump on it for hours.

Watching from her window, Stacey turned to her wife Eve Unwin (Heather Peace) to complain about her mum’s erratic behaviour.

“She’s still out there with Harvey, making a t*t of herself,” Stacey started, before telling Eve about a traumatising incident with her mum when she was a kid and they went ice skating.

While Stacey’s monologue was very moving, fans were too distracted by her use of the word t*t before the 9pm watershed.

“I came here to check if Stacey did INDEED say t*t – thanks for the confirmation folks,” tweeted one fan.

Another asked: “Did Stacey honestly just say that Jeans been making a t*t of herself.”

And a third added: “Did Stacey just say t*t?! Can’t you say that before the watershed..” 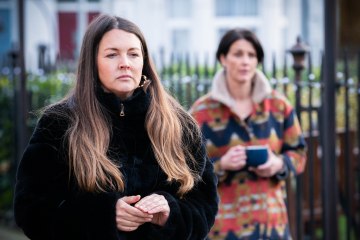 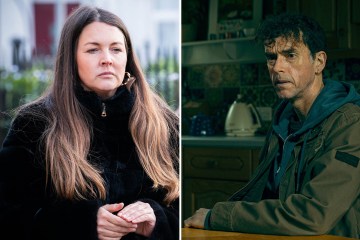 The BBC is regulated by Ofcom whose Broadcasting Code dictates strict rules about what can be shown on TV before the 9pm watershed.

The watershed was designed to protect children from ‘unsuitable material’, including swearing, sexual content, violence or graphic imagery.

The media regulator issued a reference guide for broadcasters for non-discriminatory words and placed them on a sliding scale ranging from mild to strongest words.

While t*t does not appear on this guide, the plural t**s as a reference to body parts does and is considered “medium language” which has the potential to be “unacceptable pre-watershed”.

“Vulgar or sexual use heightens the impact,” the guide reads.

Monday’s episode saw Stacey make the tough decision to ban Jean from being alone with her kids.

She made the decision not only after Jean spent hours on the jumping castle but when accidentally hurt Arthur (Hunter Bell) and didn’t even notice as the boy ran off crying.

Jean continued to embarrass herself and was joined by Harvey Monroe (Ross Boatman) who was scolded by Stacey for not understanding Jean’s condition.

After some thought, Stacey decided to come to a tough decision and broke the news to her devastated mum.

“You pushed Arthur, you hurt him… the fact you don’t even know you left my son crying proves it ain’t safe for you to be around the kids,” she told Jean.

“I don’t want you to be alone with the kids until you’re feeling better, calmer.”

Jean replied through tears: “Are you saying I can’t see my own grandchildren… how could you do that to me? Why would you be so cruel?”

Stacey insisted that until her mum got help and saw a doctor she could not be alone with the kids.

She called her mum Jean a t*tCredit: BBC

Jean had hired a jumping castle and blocked the Walford market for hoursCredit: BBC

Previous post The U.S. Capitol will start formally reopening to tourists next week.