The eastern indigo snake was found in Alabama for the second time in more than 60 years.

According to a Facebook post from the Alabama Department of Conservation and Natural Resources, the reptile was found on March 16.

The first wild-born snake was found in 2020, an indication that the snake is breeding again in the southern state.

“The young snake was found yesterday and is the product of natural pairings among those purposefully released in Conecuh National Forest. The Eastern indigo project started in 2006, and the program started releasing captive-raised indigos in 2010. The goal is to release a total of 300 snakes over the years to improve the chances of establishing a viable population,” the department said.

During the “early days” of its indigo project, the released snakes were propagated from indigos that had been captured in the wild in Georgia. 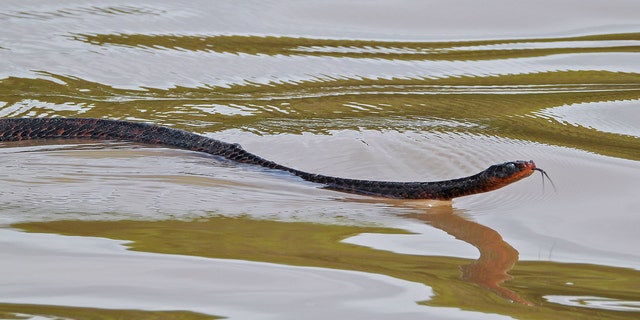 “The snake found yesterday indicates that the project is resulting in some thriving and reproducing indigos – just what we wanted! Reintroducing a species to its native range is a daunting task and we celebrate each step of its success!” the department exclaimed.

Indigos are a federally listed protected species and permits are required to interact with the snakes.

In an interview with AL.com, department biologist Traci Wood said the second snake was found by Auburn University graduate student Francesca Erickson, who was conducting a survey in the Conecuh National Forest.

She also told the publication that the snake was approximately 1 foot long and probably less than a year old. It was fitted with a passive integrated transponder (PIT) tag and released back into the forest.

According to Auburn University, the eastern indigo snake is the longest native snake in North America, stretching to a size of 8.5 feet.

The indigo is non-venomous and docile and is named from its blue-black coloring.

Wood points out that the snakes keep “everything in balance,” and have been documented feeding on venomous snake populations.

However, habit destruction, fragmentation and degradation mainly caused by the extension of urban development has continued to threaten the “emperor of the forest.”

While the snake’s International Union for Conservation of Nature status is of “Least Concern,” the snakes lose more than 5% of their habitat each year in Florida.

The Smithsonian’s National Zoo & Conservation Biology Institute notes that the longest the species has survived in human care is for 25 years and 11 months.

Previous post March 22: Daily guide to what your star sign has in store for your zodiac dates

Next post Judging a Judge on Race and Crime, G.O.P. Plays to Base and Fringe