Though the league has relaxed its testing policy for players and most of the world moved on long ago, ESPN NBA Insider Adrian Wojnarowski and game analyst Jeff Van Gundy will both miss tonight’s start of the NBA Finals due to COVID, per the New York Post. 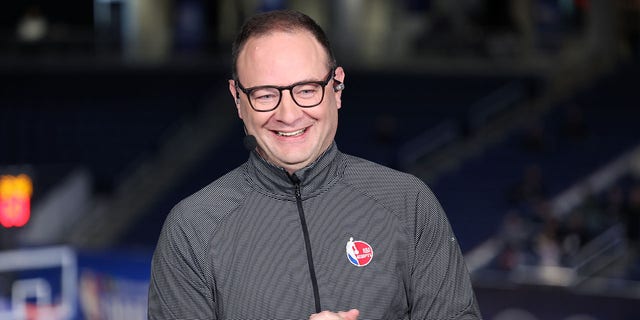 ESPN Analyst, Adrian Wojnarowski, reports during the 2022 NBA Draft Combine on May 18, 2022 at Wintrust Arena in Chicago, Illinois.  (Photo by Jeff Haynes/NBAE via Getty Images)

As of early this afternoon, it’s currently unknown if lead announcer, Mike Breen, who missed Sunday’s Eastern Conference Finals Game 7 between Boston and Miami because of COVID, will be on the call. 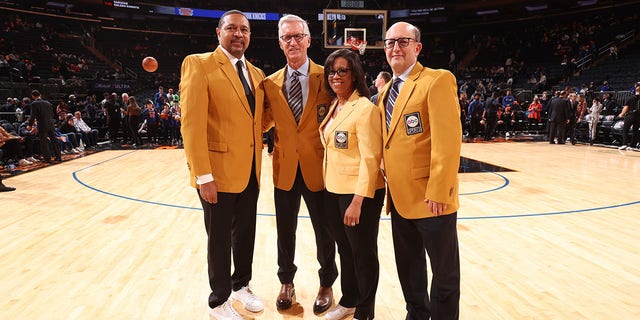 The ESPN Broadcast Crew, Mark Jackson, Mike Been, Lisa Salters, and Jeff Van Gundy pose for a photo before the NBA 75 Game between the Brooklyn Nets and the New York Knicks on April 6, 2022 at Madison Square Garden in New York City, New York.   (Photo by Nathaniel S. Butler/NBAE via Getty Images)

Van Gundy and Breen are part of a three-man booth that also includes Mark Jackson. Should Breen not be cleared to return, Mark Jones will likely call the game alongside Jackson. Jones stepped in for Breen during Sunday’s game from Miami.

It’s not as unusual for Woj to be off-site for broadcasts. His primary role is to provide insight during appearances on ESPN’s “NBA Countdown.” It would be reasonable to assume he can connect remotely if and when needed during the course of the series.

Andrew Marchand of the New York Post reports that “the hope for Van Gundy is to rejoin Jackson and Breen by Game 2 in San Francisco, which is Sunday.” 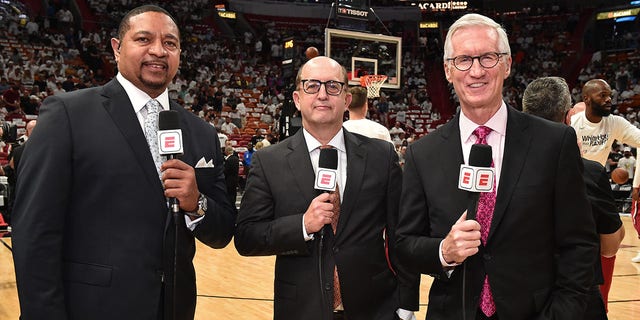 ESPN Analysts Mark Jackson, Jeff Van Gundy, and Mike Breen, pose for a photograph before the game between the Boston Celtics and the Miami Heat during Game 1 of the 2022 NBA Playoffs Eastern Conference Finals on May 17, 2022 at FTX Arena in Miami, Florida.  (Photo by David Dow/NBAE via Getty Images)

Between this recent COVID “outbreak,” ESPN’s liberal agenda, Steve Kerr’s preference to partake in cosmetic masked theatre, and the Finals taking place on the left coast, you can bet viewers will see as many masked individuals as made baskets.

Game One of the Finals between Boston and Golden State tips Thursday evening at 9:00 pm EST.