The full strawberry moon will reach its peak on Tuesday morning.

This year, it’s a supermoon, according to the Old Farmer’s Almanac.

The publication said that it will reach peak illumination at 7:52 a.m. ET.

In North or South America, EarthSky notes, the fullest moon hangs in the West before sunrise on the 14th.

The name “strawberry moon,” the agency notes, does not necessarily mean the moon is red, although it does appear pinkish when rising or setting.

Some Native American tribes referred to this full moon as the strawberry moon because it marked a time for gathering ripening strawberries. 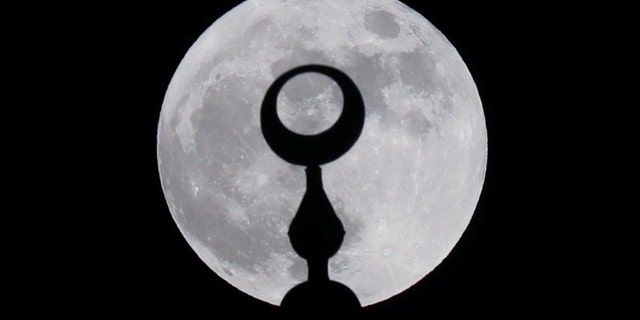 The supermoon, known as the “Strawberry Super Moon” rises over a minaret of the Greatest Mosque in Zahraa El Maadi, a suburb of Cairo, Egypt June 24, 2021.  (REUTERS/Amr Abdallah Dalsh)

An old European name for the full moon is the mead moon or honey moon.

Mead is created by fermenting honey and mixing it with water and other fruits, spices, grains or hops.

“In some countries, mead is also called honey wine (though in others honey wine is different). Some writings suggest that the time around the end of June was when honey was ready for harvesting, which made this the “sweetest” moon,” NASA explains.

The term “honeymoon” may be tied to this full moon.

Another European name for this full moon is the rose moon, which originates either from the color of the moon or the roses that bloom during the season.

Other names include the flower moon, hot moon, hoe moon and planting moon.

A supermoon occurs when a full moon coincides with the moon’s closest approach to Earth in its elliptical orbit, a point known as perigee.

Although “supermoon” is not an official astronomical term, it’s typically used to describe a full moon that comes within at least 90% of perigee, appearing larger and brighter than usual.

While a new moon can also be a supermoon, people typically cannot see a new moon because it is between the Earth and sun, and not illuminated.