SHE needed a posh dress to go to Ladies’ Day at the races.

So Leanne decided to place an order on Boohoo, and took to TikTok to ask for people’s opinions on the dresses she was sent.

Leanne took to TikTok to share a video of herself trying on dresses from Boohoo ahead of Ladies’ Day at the racesCredit: TikTok / @leanneandbarney

She wasn’t keen on this dress, which she said made her look like a “Roman emperor”Credit: TikTok / @leanneandbarney

“This is the first dress that I tried on,” she said of a pale pink wrap dress.

“It’s a little bit see-through, not sure if I like it really.”

The second dress was more of a hit though, as she said: “I really like this one but I’m not sure if it matches the shoes and the fascinator, but that is definitely a contender.”

Leanne had already bought a beige fascinator and matching heels for her day out. 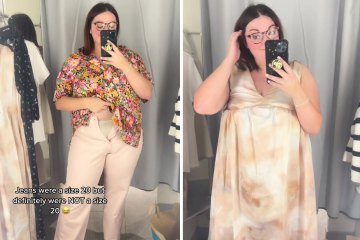 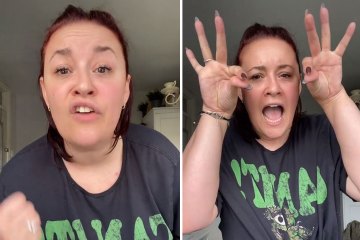 The third dress was an instant no for Leanne, as she laughed: “This one, I look like a Roman emperor in.

“Not keen on that at all and it was so see-through, I just look like I’m going to bed.”

The next was a long-sleeved option with lace sleeves in a similar pale pink shade, but Leanne admitted that she “couldn’t get it past my boobs”.

Going back to the only dress she really liked, the rose pink one, she decided to try it on with a different hat and some black shoes.

“But I think I look like Mary Poppins here, so I don’t know if that’s a good look either,” she sighed.

She then swapped the hat and heels back to the original fascinator and shoes, as she said: “I think I might need to find a new fascinator – what do you guys think?”

In the comments section, people quickly agreed with Leanne that the rose pink dress was the best one.

“Defo number two, you look so beautiful,” one person wrote.

While another added: “Definitely second one, get new shoes and new head piece to go with it.”

“I loved the number one dress,” someone else commented, to which Leanne replied: “Thank you, it’s a bit short though and the dress code is quite strict.”

This was also a contender, but Leanne decided it was too short for the event’s strict dress codeCredit: TikTok / @leanneandbarney