REAL Housewives of Dubai star Caroline Stanbury and her husband Sergio Carallo have given fans a look inside their stunning home.

The breathtaking Dubai pad features a pool, luxurious decor, and even a portrait of the couple themselves.

Real Housewives of Dubai star Caroline Stanbury and her husband Sergio have shown viewers inside their massive Dubai mansionCredit: Instagram

Their master bedroom is complete with cozy soft furnishingsCredit: Instagram

Appearing on the premiere episode of Real Housewives of Dubai, Caroline, 46, and Sergio, 27, let viewers inside their far-from-humble home.

Their master bedroom features a huge bed with an oversized headboard and eggshell blue walls.

The space is furnished with teal nightstands stacked with books, and opulent gold lamps.

In the bedroom, the couple have decided to hang an acrylic portrait of themselves, which shows Real Madrid star Sergio kissing his wife. 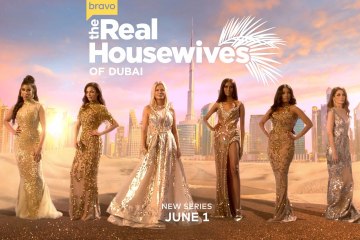 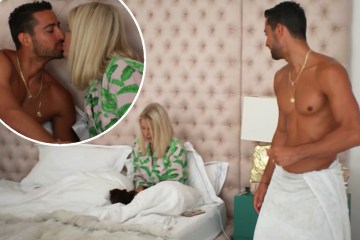 The lovebirds even keep a portrait of themselves in their bedroomCredit: Bravo

The huge ensuite bathroom has marble walls and a giant double vanity lined with her beauty products.

In her closet, Caroline keeps an impressive collection of designer handbags including a crocodile Hermes Birkin bag worth around $60k.

Caroline’s designer home is the perfect blend of contemporary and classic tastesCredit: Instagram

Her main living room has a touch of LA style with a comfy sofa and views of the greenery outside, making it a perfect space to catch up with friends.

Outside, the minimalist backyard makes for an oasis with palm trees and a pool, ideal for cooling down during Dubai’s notoriously hot summers.

White walls and plenty of greenery offer a relaxing outside spaceCredit: Instagram

Caroline and Sergio’s house attracted attention immediately after the premiere episode of Real Housewives of Dubai but not entirely for the right reasons.

Fans were shocked after they noticed a gross detail during one scene in the couple’s bedroom.

Caroline’s dog Cocoa had an accident on the bed.

Caroline then turned to her husband as he stepped into the room and told him: “Sergio, Cocoa just peed on the bed. I mean, for God’s sake he’s already started training and he’s still peeing on the bed.”

But despite the mess, he still decided to join her under the covers and they ordered breakfast drinks from her housekeeper.

With their own personal staff on hand, Caroline and Sergio barely need to any chores around their huge homeCredit: Instagram

Fans were quick to attack the duo on social media, questioning their decision to lay in a bed after it had been peed in.

One critic tweeted: “I’m still sitting here trying to figure out how they just kept sitting there in the bed the dog p****d on. No ma’am.”

Another wrote: “So the dog peed on the bed but y’all still laying in those sheets?”

Dubai is the latest city to join the Real Housewives franchise.

However, some fans will recognize Caroline already for her stint on the network’s now-canceled show Ladies of London.

She appeared on all three seasons, airing from 2014 to 2017, but since swapped her native city for life in the Middle East.

As viewers have seen, she’s settling into Dubai with her new hubby Sergio, whom she began dating in 2020.

The Ladies of London-alum was previously married to Turkish financier Cem Habib, with whom she shares two children.

But the couple divorced in 2019 after fifteen years of marriage.

Caroline’s living room is the perfect place for her to catch up with her castmatesCredit: Instagram

Real Housewives of Dubai is the latest franchise to land on Bravo screensCredit: Bravo

The Bravo star is 19 years older than her new husbandCredit: Instagram

Next post As gas prices soar, Americans consider if businesses should allow employees to work virtually to save money