GINO D’Acampo has given fans a peek inside his incredible family car with personalised seats and even a coffee machine.

The This Morning chef, 45, was hanging out with Heart presenter Mark Wright who posted a series of clips of Gino’s impressive ride.

The seats are personalised and there’s even a TV

Revealing a coffee machine in the boot of the vehicle, Mark told his followers: “This is what you call big cheese.

“Gino D’Acampo has his own coffee machine in his boot. His driver makes it as he comes out of work.”

Mark, 35, then showed off the personalised seats inside the car, which are stitched with the names of Gino, his wife Jessica and their children Luciano, Rocco and Mia.

When the family are travelling in the vehicle they can catch up on TV as it also has a screen installed above the seats. 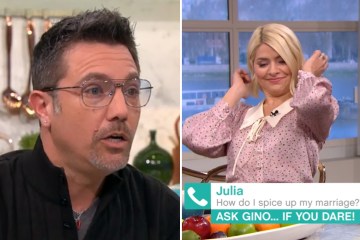 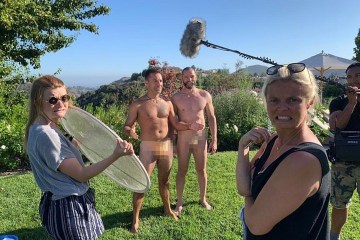 Sipping on his coffee as he entered the car, Gino joked: “People they often ask me ‘why are you in showbiz?'”

Gesturing around the car, he said: “Well, that’s why!”

Gino and his family may travel in style but he recently opened up about life at home and insisted he’s a strict dad.

Appearing on the Sweat, Snot and Tears podcast, he said: “There are a lot of rules in my house. I run a house with rules, probably because I worked in restaurants for many years.

“For me in the restaurants, it’s always been about following the rules, keeping the restaurant clean – and it’s the same thing with the house, I hate when it is messy.”

The star admitted he instilled his values early on in his three kids by ensuring he was “always up for a fight” to teach them right from wrong.

Gino also gloated that fussy eaters do not exist in his family as he would even send his youngsters to bed “hungry” if necessary.

“There is no such thing as a fussy child, there is a thing of moron parenting,” Gino scathed. “It’s the parents that can’t be bothered to fight, to have an argument at the table or to see their children go to bed without having any food.”

Previous post 400 Years Ago, They Would Be Witches. Today, They Can Be Your Coach.
Next post American spy agencies review their misses on Ukraine, Russia