Liberals are starting to reject their own. This is the opening Republicans have been waiting for. It’s time for a 50-state Republican strategy for victory.

Laura Ingraham discussed how the GOP’s popularity in once full-blue states is reaching new levels as the liberal agenda’s popularity drops Wednesday on “The Ingraham Angle.”

LAURA INGRAHAM: For years, Republicans essentially just wrote off California as they had New York and New England states — not going to worry about campaigning there — can’t win there, right? For the presidential. We were told that the GOP was facing extinction even, and that it could even get wiped out in a state like Texas.

Of course, we never bought any of this. We’d certainly didn’t buy into the defeatist mindset on the GOP part. After all, we know that liberal policies, once they’re really embraced and enacted, well, they end up producing only resentment, then a lower standard of living, more crime and, of course, misery for everybody except maybe a few plutocrats. Last year when “The Angle” reported from San Francisco, we sensed that people there had just gotten fed up with the crime, the filth and, yes, the homelessness.

Yeah, even tolerant San Franciscans couldn’t take it any longer. DA Chesa Boudin is out, and now the city has a chance to start making better choices. I mean, what did they think, though, when they elected the child of the Weather Underground duo of [Bernardine Dohrn] and Bill Ayers? What were they thinking in San Francisco? And it’s worth noting where the votes for the recall of Boudin came from. The only areas where voting did well were white, rich, liberal enclaves — the type of progressives who live there who just look down on the average working person and who basically believe that their suffering is justified for the greater good. 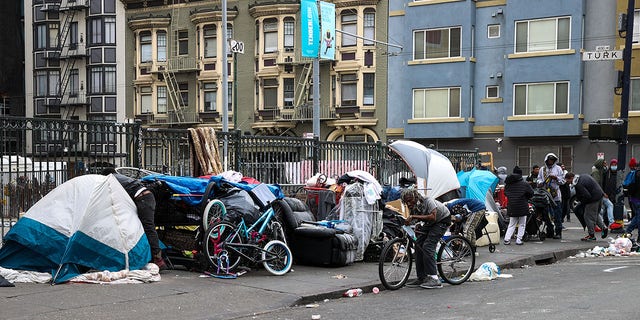 Homeless people are seen on streets of the Tenderloin district in San Francisco, California, United States on October 30, 2021. (Photo by Tayfun Coskun/Anadolu Agency via Getty Images)

But working-class people, areas with high concentrations of Hispanics and Asians, they turned out in droves for the recall of the DA. Turns out they won’t be fooled again. They want and they deserve a better life. So no amount of bad-mouthing America as a rotten, racist, misogynist or colonial power is going to make the Liberals horrible policies go down any better for the working class of this country.

Think about it this way: Immigrants came here because they loved what America offered. Freedom, a fair shot at a prosperous life, schools that teach, the ability to worship in peace, safety. But with Democrats, all they get is racial resentment, victimology, high taxes, high prices, open borders and out-of-control crime. But look, I don’t have any great illusion that Democrats will see San Francisco as a wake-up call. I really don’t because I don’t think they will.

Next post Nick Quested: A documentary filmmaker who had embedded with the Proud Boys is now in the spotlight.