DANIIL MEDVEDEV has replaced Novak Djokovic as world No 1 as the fallout over Wimbledon banning Russian players continues.

The movements at the top of men’s ATP table comes as the All England Club had its ranking points removed, a report by BBC Sport explains.

Russia’s Daniil Medvedev is the new world No 1 in men’s tennisCredit: Getty

He has replaced Serbian star Novak Djokovic, who has fallen to third with 6770 – with 2000 points he collected for his 2021 French Open win dropping off his rankings total today.

The fact Wimbledon has been stripped of its ranking points over its decision to ban Russian and Belarusian players over Russia’s invasion of Ukraine will also have a bearing on the standings going forward. 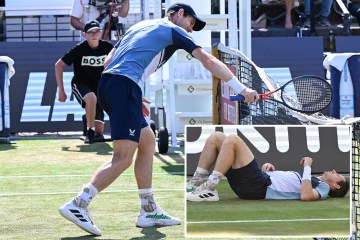 It means Medvedev will both not be able to play at this month’s SW19 Slam – while also benefiting from less of a hit to his ranking points total than some top rivals.

Six-time Wimbledon champion Djok will lose the 2,000 ranking points he got for winning it last year.

But Medvedev and Zverev only stand to lose 180 points as they went out in the fourth round in 2021.

Zverev, incidentally, will also miss Wimbledon this year with an ankle injury.

It all means Medvedev is the first player other than Djokovic, Rafael Nadal, Roger Federer or Andy Murray to top the men’s rankings in 18 years.

American Andy Roddick briefly replaced Djokovic as No 1 in February 2004.

Next post Brooke Burke on keeping her brother Tommy’s legacy alive after obesity battle: ‘He should still be here’