A delivery driver in Harlem was robbed in broad daylight and shot in the leg Monday afternoon, according to police.

The 55-year-old driver was unloading a work truck around 1:30 p.m. in front of 21 East 129 Street when a man approached him and brandished a gun, police said. 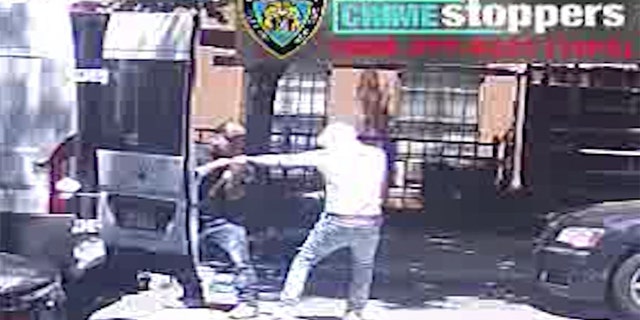 A delivery driver robbed in broad daylight in Harlem.  (NYPD)

The gunman grabbed the delivery driver’s chain – worth around $8,000 – and tried to pull it off his neck, police said.

The delivery driver fought back, and a struggle ensued. Police said the victim tried to escape and was shot in the left leg. The gunman then forcibly grabbed the victim’s chain before fleeing on foot westbound on 129 Street and drove away in a black BMW.

EMS responded to the scene and transported the delivery driver to NYC Health + Hospital/Harlem where he was treated and released.

Police said the suspected robber is a 30-year-old male with a dark complexion, 180 lbs., approximately 5’9″ with a thin build. He was last seen wearing a gray sweat jacket, light blue jeans, and white sneakers.

NYPD is asking the public’s help identifying this individual. Anyone with information regarding the incident is asked to call the NYPD’s Crime Stoppers Hotline at 1-800- 577-8477.