Oregon schools in the North Clackamas District contain books with pornographic imagery, including imagery of sex acts, according to an online portal schools use to track books available for children to take out at their libraries.

Schools around the country use the program Destiny to track books taken in and out of its library. Fox News Digital obtained screenshots of inappropriate titles and books on gender ideology at most of the district’s schools.

Destiny listed books in at least three high schools, Milwaukie, Adrienne C. Nelson, and Clackamas high schools that actually contain depictions of sexual activities, including oral sex. Some images are so graphic that they are being withheld from this story.

A mother in Oregon pulled her children out of the schools as a result of what she believed was indoctrination in Oregon schools.

“It’s not about how I feel. It’s about that the laws are being broken,” Kristen Stevens told Fox News Digital. “Children are being exposed to sexual content at an age that they’re not developmentally ready to be exposed to this. It actually can cause PTSD in a lot of these children.”

“Pull your children out of school, it will not change. Starting next year, it will get worse,” she said. “It’s not worth handing your child over to the government to let them teach them sexually explicit content or to teach them the indoctrination… The next thing you know, you look at your child, and you no longer recognize them because they’re not your child anymore.”

The book has made controversy in other verticals as well. When it was assigned for freshman reading at Duke University – a Christian student wrote in The Washington Post that he refused to read it because there is an “important distinction between images and written words… But viewing pictures of sexual acts, regardless of the genders of the people involved, conflict with the inherent sacredness of sex.”

The book was present at Milwaukie High School, according to Destiny. 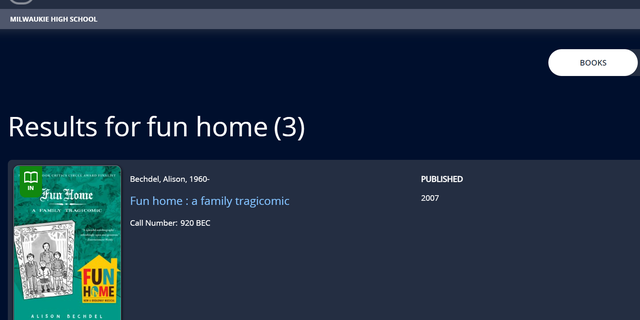 In a scene illustrating sex, the caption states, “This would evolve into hip-thrusting while thinking of my latest gay ship.”

This book was present at Adrienne C. Nelson High School and Milwaukie High School, according to Destiny. 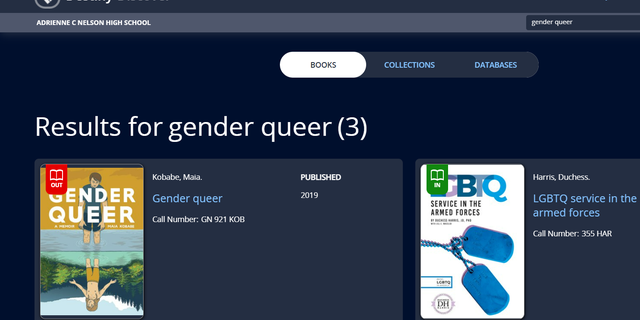 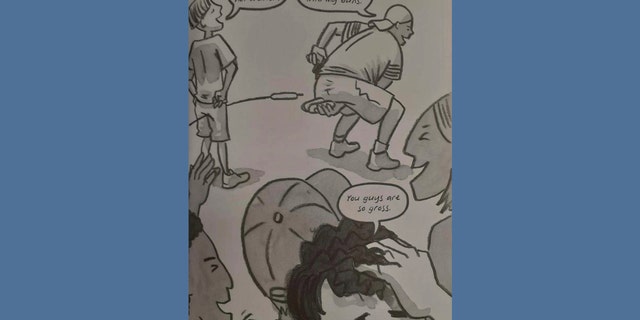 Flamer is a semi-autobiographical graphic novel by Mike Curato.

“We’re canoeing out to Frying Pan Island, which supposedly looks like a frying pan, but we’re all certain it looks like a c— and b–s,” the book said.

This book was present at Clackamas High School and Milwaukie High School, according to Destiny. 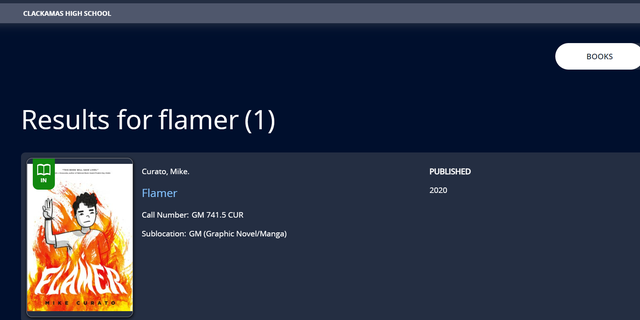 “Juliet Takes a Breath” by Gabby Rivera discusses a woman’s journey coming out as a lesbian and contains extremely graphic imagery of sexual encounters.

This book was present at Milwaukie High School, Clackamas High School, and Adrienne C. Nelson, according to Destiny. 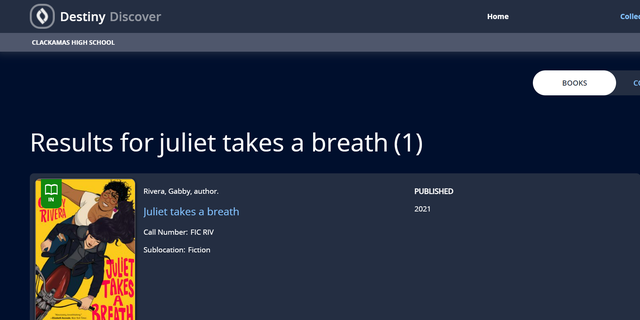 “Milk and Honey” by Rupi Kaur is a collection of poetry that deals with themes of femininity, love, trauma and violence. One of the pages depicts a naked woman’s legs spread open with a poem in the center. It states, “you have been taught that your legs are a pit stop for men that need a place to rest; a vacant body empty enough for guests, but no one ever comes and is willing to stay.”

This book was present at Clackamas High School, Milwaukie High School and Adrienne C. Nelson, according to Destiny. 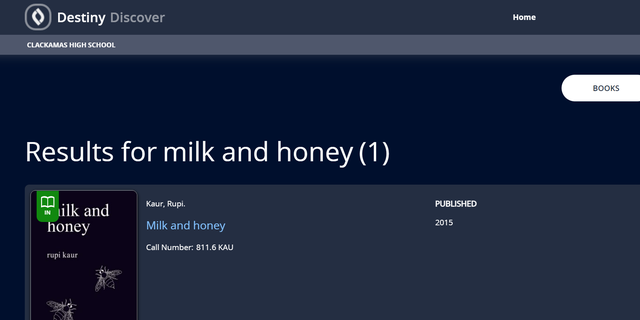 I am Jazz – Elementary

“I Am Jazz” is co-written by Jazz Jennings, who starred on a TLC show highlighting her life as a transgender teen. The plot begins with a young boy trying to convince his parents that he is a girl. “Pretending I was a boy felt like telling a lie,” Jennings said.

“Then one amazing day, everything changed. Mom and Dad took me to meet a new doctor who asked me lots of questions. Afterward, the doctor spoke to my parents and I heard the word ‘transgender’ for the very first time. The night at bedtime, my parents both hugged me and said, ‘We understand now. Be who you are. We love you no matter what,” the text continued.

The book also discusses how using the boys’ bathroom didn’t feel normal “at all.”

It was present at Morrow Cannady Elementary and Lot Whitcomb Elementary, according to Destiny.

The book whose former title was “George” is about a fourth-grade transgender girl’s journey. Some of the passages in the book refer to a child’s sex organs in crude terms.

“She immersed her body in the warm water and tried not to think about what was between her legs, but there it was, bobbing in front of her,” the book said.

In another part of the book, it states, “There was nothing George dreaded more than when boys talked about what was in her underpants.” 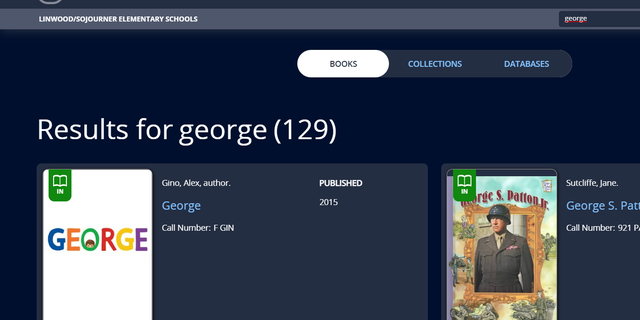 When George asks a girl named Kelly about not wearing skirts, she said, “I don’t wear them to school. Boys are dirty and try to look up them.”

“I’d never try to look up your skirt,” George replied.

Another part of the book discusses Melissa’s (formerly, George) experience using the bathroom.

“Melissa locked herself in a stall, delighted for the privacy. She lifted her skirt to see her underwear, covered in tiny red hearts. She pulled it down, sat, and peed, just like a girl… This part of this magnificent day was her personal secret,” the book said.

Julian is a Mermaid – Elementary

The book by author Jessica Love describes a boy who wants to become a mermaid. In the book, the boy repeatedly strips down to his underwear. Later, he puts on lipstick and dons a headdress. He is then given costume jewelry before being taken to the NYC Mermaid Parade where he can freely express himself.

“This is a boy named Julian, and this is his Nana. And those are some mermaids,” the book says with an illustration of women dressing up as mermaids.

“This beautiful book is one of the very few picture books about a gender non-conforming child,” a review of the book, posted to the author’s website, said.

It Feels Good to Be Yourself: A Book About Gender Identity – Elementary

The book teaches children about transgender and cisgender identities.

“This is… Xavier. Xavier is a cisgender boy. That means when Xavier was born, everyone thought he was a boy, and as he grew older, it turned out everyone was right – he is a boy.”

“Everyone feels like either a boy or a girl,” except nonbinary children, the book explained.

SEVEN BOOKS THAT SHOW NYC IS PUSHING TRANSGENDERISM, LGBTQ+ CURRICULUM TO KIDS AS YOUNG AS KINDERGARTEN

This is Ruthie’s friend Alex. Alex is both a boy and a girl. When Alex was born, everyone thought Alex was a girl, but Alex is both boy and girl. This is Alex’s gender identity.”

Another character JJ, is neither a boy or a girl and has “they” pronouns. “Ever since JJ was very little, they never felt exactly like a boy or a girl – they just felt like themself. This is JJ’s gender identity.”

The children’s book further claims that “there are many different ways to be a boy or a girl… [or] non-binary.”

This book was present at Beatrice Morrow Cannady Elementary, according to Destiny.

When Aidan Became a Brother – Elementary 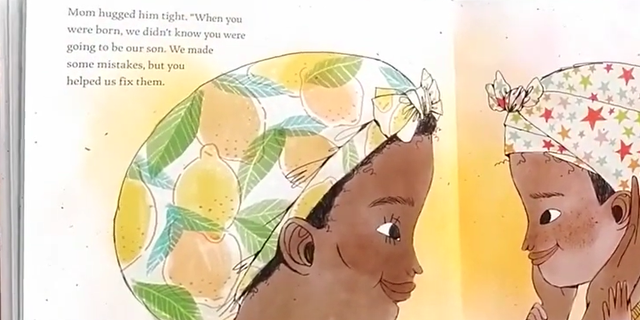 When Aidan Became a by Kyle Lukoff (YouTube/Screenshot)

The book explores the journey of a young boy named Aidan coming out as transgender.

The book says, “When Aiden was born, everyone thought he was a girl. His parents gave him a pretty name… But as Aidan got bigger, he hated the sound of his name… He was really another kind of boy.”

Aidan’s mother admits she made a mistake misgendering her son, saying, “When you were born, we didn’t know you were going to be our son. We made some mistakes, but you helped us fix them.”

Then, when Aidan’s mother became pregnant, she was asked by someone whether the baby was a boy or girl. “Aidan didn’t like it when people asked if he was a boy or a girl, and he hoped the baby couldn’t hear yet. He was glad when Mom just smiled and said, ‘I’m having a baby.'”

This book was present at Scouters Mountain Elementary, according to Destiny.

None of the schools responded for comment when Fox News Digital reached out to them about the books.

Hannah Grossman is an associate editor at Fox News Digital. Story tips can be sent on Twitter: @GrossmanHannah.