One of the survivors of a mass shooting that claimed the lives of 10 people in a Buffalo, supermarket is asking a court to preserve all evidence connected to the attack in a “pre-disclosure” action against the suspected gunman’s parents.

Zaire Goodman and his mother Zeneta Everhart filed the motion as a possible precursor to a lawsuit against Paul and Pamela Gendron, the parents of 18-year-old Payton Gendron. The disclosure also asks the court to identify any other possible defendants in the case and that all electronic items such as laptops, cellphones, video games and tools that may have been used to modify the weapon used in the attack be preserved as well as internet browser history and metadata.

Gendron is accused of opening fire inside the Tops Friendly Market on May 14. The attack left 10 people dead and three others injured.

The court documents said Gendron’s parents “had actual knowledge of Payton Gendron’s propensity for vicious conduct, such as killing and racially-motivated hatred, but did nothing to restrain his actions.”

BUFFALO TEEN WHOSE AUNT, COUSIN WERE INSIDE GROCERY STORE DURING ATTACK: ‘WE’VE GOT TO COME TOGETHER’ 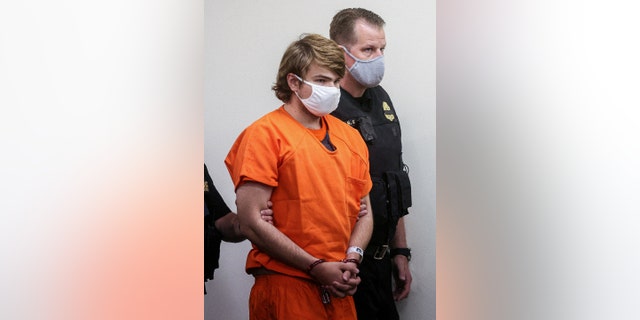 Buffalo shooting suspect, Payton S. Gendron, who is accused of killing 10 people in a live-streamed supermarket shooting in a Black neighborhood of Buffalo, is escorted in the courtroom in shackles. A survivor of the attack has filed a motion in a precursor to a possible lawsuit against Gendron’s parents. (Brendan McDermid)

They also failed to restrain their son “from intentionally harming others with knowledge of his propensity for vicious conduct; and not only failed to prevent Payton Gendron from launching a racist and murderous but encouraged his actions,” the documents state.

“Ben Crump and I promised the families that we represent that we would get to the root cause of this racist and murderous plot,” Goodman’s attorney, Terrence Connors, said in a statement to Fox News. “This is the first step.”

Gendron, who is White, pleaded not guilty this week to 25 charges, including 10 counts of first-degree murder as a hate crime.

An indictment said he killed the victims “in whole or in substantial part because of the perceived race and/or color of such person or persons regardless of whether that belief or perception was correct.”

He arrived at the market and opened fire outside before going inside and unleashing a barrage of gunfire, authorities said. Eleven of the victims were Black. Gendron allegedly live-streamed the attack before it was quickly taken down.

The Justice Department is investigating the shooting as a hate crime in a separate probe.

Next post ‘We Have Not Forgotten Syria’: U.S. Envoy Vows to Protect Refugees