THIS is the shocking moment Russian troops were caught on video opening fire and hurling stun grenades at unarmed civilians.

Russian forces occupying Kherson, Ukraine, used stun grenades and gunfire to disperse a rally of protesters as they gathered in Svobody Square.

Multiple videos on social media showed crowds gathering in the square today before loud bangs and flashes followed by intense gunfire caused them to flee.

It is unclear if the soldiers initially fired into the sky, but they are believed to have turned their guns on civilians, reports The Telegraph.

Heavy gunfire could be heard for over a minute as smoke spread across the square. 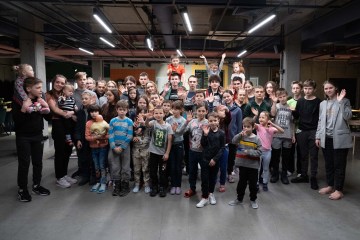 “This is the ugly face of Russia, a disgrace to humankind. We must stop Russia! Sanction them, isolate them, hold war criminals to account.”

Kherson, around 60 miles northwest of Crimea, was the first significant Ukrainian city to be occupied by Russian forces.

There have been regular large civilian demonstrations against the occupiers, with Russian troops struggling to keep control.

Footage from the aftermath of the event appeared to show at least one civilian laid on the ground bleeding heavily.

Local media confirmed later that the one person reported wounded at the scene was the man on video.

In one of the videos, civilians are seen running away through smoke-filled streets as Russian soldiers walk towards them firing their rifles into the air.

The smoke may have been tear gas while the loud bangs are thought to have been caused by flashbang grenades.

Ukrainian media reported that a memorial located in the centre of the square had been defaced with graffiti.

The vandals wrote a message accusing Ukrainian forces of being “murderers of the children of Donbas” and that locals had been trying to clean it.

The attacks came as Vladimir Putin’s warships opened fire on civilian areas in the Black Sea port city of Odesa today, marking the first time residents have been targeted.

A civilian protester lies on the ground bleeding from a leg woundCredit: Reuters

As thick smoke billowed around civilians were quick to exit the squareCredit: Solarpix

Previous post It’s Now Putin’s Plan B in Ukraine vs. Biden’s and Zelensky’s Plan A