Tennessee became the first state to receive child cancer patients from Ukraine amid the Russian invasion.

“Our promise to children with catastrophic diseases extends around the globe, and we are honored to play a part in helping these families move to safety to continue their children’s treatment,” St. Jude President and CEO James R. Downing said in a press release Tuesday.

Four children and their families arrived Tuesday at St. Jude Children’s Hospital in Memphis, the first U.S. hospital to take in Ukrainian patients. The children’s ages range from nine months to 9 years old.

The children and their families traveled aboard a U.S. government-operated medical transport aircraft from Krakow, Poland, where more than 2 million Ukrainian refugees currently reside.

The children will receive intensive medical care alongside cancer treatment, including “trauma-informed psychosocial therapy to address psychological, social, emotional and cultural needs,” according to the press release. 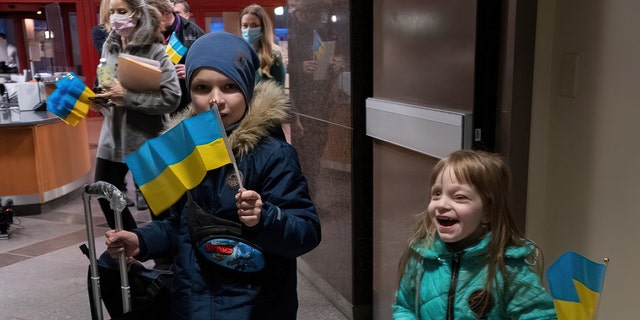 A brother and sister arrive at St. Jude Children’s Research Hospital in Memphis after traveling from Ukraine as a part of the St. Jude Global SAFER Ukraine project. The girl is among the first group of Ukrainian pediatric cancer patients to come to the United States to continue their long-term cancer treatment. SAFER Ukraine is a humanitarian effort launched following the Russian invasion to provide safe passage for childhood cancer patients and their families out of Ukraine. (St. Jude)

St. Jude said it will develop a school curriculum for the patients and their siblings.

After the start of the war, St. Jude established SAFER Ukraine, a humanitarian program to increase the survival rates of children with cancer and other serious diseases. St. Jude said it has assisted more than 600 patients via the program.

First lady Jill Biden’s office announced Tuesday she will visit St. Jude’s hospital in Memphis on Friday to support programs helping pediatric cancer patients, according to Fox 13 Memphis. Her office did not specify in the announcement if the first lady will meet with the Ukrainian patients.

Previous post Review: ‘The Hours’ Will Bring Renée Fleming Back to the Met