As if this country’s core institutions have not been degraded or diminished enough with pregnant flight suits and an FBI that behaves like Nancy Pelosi’s pretorian guard, as if that weren’t bad enough, Joe Biden announced in January his plan to choose the next Supreme Court justice on the basis of appearance. The Supreme Court. You never thought that would happen. The sociology department, maybe. Your company, perhaps. But the Supreme Court really matters.

What does appearance have to do with ability or fealty to the Constitution? Joe Biden never explained. He did indicate, to be fair, that he would prefer a lawyer for the job, maybe even a clever one, but mostly he said he wanted a Black woman—genetics being the single most important factor in we used to call judicial temperament.

How does that work, exactly? How did genes determine your ability as a Supreme Court justice or a surgeon or an airline pilot or anything else? We would love to hear Joe Biden explain that, but he didn’t. Instead, he embarked on a predictably short nationwide search for such a candidate and located in the end, a person called Ketanji Brown Jackson. Her confirmation hearings continue today for the second day. Not surprisingly, given how she got this job, most of the talk in Washington was not about what she’s done, how she thinks, what she’s like as a person, but instead about how she looks. It’s not shallow or anything. Here’s the shallowest of all: Sen. Cory Booker of New Jersey. 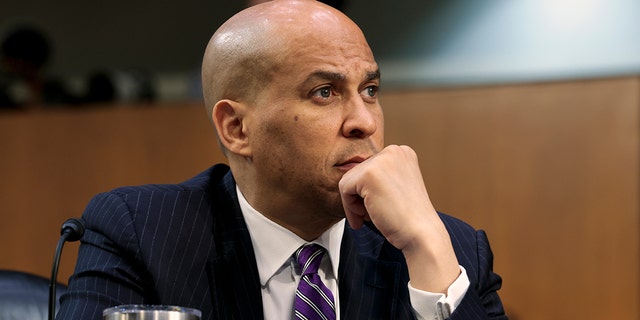 SENATOR CORY BOOKER: I could not stop being just joyous that you were sitting in my office and I couldn’t stop bringing up to you the historical nature of this. Forgive me, I grew up in a small Black church where I was taught to make a joyous noise unto the Lord and this is not a normal day for America. We have never had this moment before.

“I grew up in a small, Black church.” No, you didn’t. Another lecture about the Black experience from a blue-eyed Yale graduate who, in fact, grew up in an all-White town, the son of IBM executives. Is there anyone on this planet phonier than Cory Booker? Ketanji Brown Jackson doesn’t seem quite so fraudulent. That would be impossible, but she does, and this is the key, share a resume that is strikingly similar to Cory Booker’s—daughter of academics, graduate of Harvard College and Harvard Law School, on the board of the single wokest day school in Washington, D.C., etc. You know exactly how that story turns out, because in the end, when they tell you you’re getting a Black nominee, they’re not talking about the son of a maid and a farm worker from Pinpoint, Georgia. In fact, we already have a Supreme Court justice like that. His name is Clarence Thomas. He’s a great man, even if no one in Washington will acknowledge that.

No, what they mean when they tell you you’re getting a Black Supreme Court justice is that you’re getting yet another Democratic Party robot with the same rigid and totally predictable views as your average professional class White liberal, but who happens to be tanner than Joe Biden. So identical, identical to everyone else in power, just a different shade. And the shade, to be fair, does make all the difference. That’s the whole point of the exercise. Because of the way that she looks, Brown Jackson, who again is just a garden variety White liberal in what she believes, but because of the way she looks, this nominee will get nowhere near the vetting of a typical Supreme Court justice and that, whatever your politics are, is a shame.

As Ruth Marcus of The Washington Post put it four years ago, when Democrats were baselessly accusing a Republican nominee of rape, “when a Supreme Court seat is on the line, the court and the country deserve the benefit of the doubt, not the nominee. ” All right. We’re kind of on board with that, actually, but that was yesterday’s standard. Today, not surprisingly, that same newspaper, Jeff Bezos’ personal newspaper, announced a new position.

The Post, put it this way in a headline: “How low will the GOP go in taking on Ketanji Brown Jackson?”

Pretty funny. It’s low to ask questions of a Supreme Court nominee, but we’re not deterred. We believe in standards on the show. The Supreme Court is, of course, one of those powerful institutions in the world. Joe Biden did not create the Supreme Court, previous generations did, hundreds of years ago. He does not own it. He merely inherited it for a short time and so the rest of us have an interest in who sits on it and who interprets our Constitution. Joe Biden, sounding maybe a touch defensive, has described Ketanji Brown Jackson as one of this country’s great legal minds and we certainly want to believe that for real, given that she’s probably going to be confirmed no matter what we think.

The question is: Is it true? Is she really one of this country’s great legal minds? One way to know, one indication, would be her LSAT scores. The LSAT is not a knowledge test. It measures logic and reasoning ability, and no one doubts it’s an accurate measure of those things, which predict legal skills and that’s why top law firms, law schools, have long used that test. So, how did Ketanji Brown Jackson do on the LSAT? Sorry, you’re not allowed to ask because asking is racism. 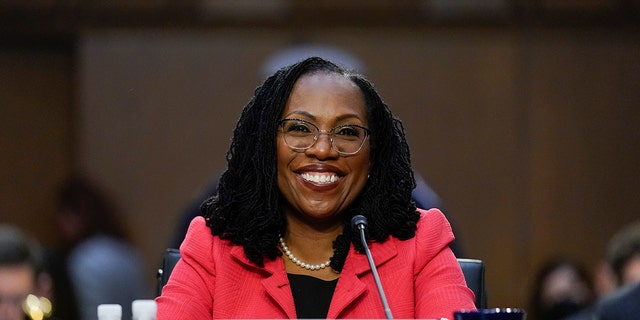 CBS NEWS CORRESPONDENT ERIN MORIARTY: After Judge Jackson’s name was announced, Tucker Carlson on his Fox News program ignored her nearly nine years on the federal bench and instead wondered about her scores on the LSAT.

ELIE MYSTAL: You do not hear substantive legal arguments about her actual decision-making process coming from these people. All they’ve got is the racism. They want to know about the LSAT scores.

JONATHAN CAPEHART: I’m not going to curse because it’s Sunday and I’d get fired, but can you talk about why what Tucker Carlson just said is so repugnant.

MAZIE HIRONO: They have implied you were solely nominated due to your race and not for other factors. Apparently, some have even claimed that you need to show your LSAT scores to determine whether you are a top legal mind. This is incredibly offensive and condescending.

“It’s repugnant.” “It’s incredibly offensive.” “She’s a top legal mind.” Shut up. We don’t have to show you proof. You’re not allowed to ask for proof. It’s hilarious. So, here you’ve got Mazie Hirono, the Senate’s dumbest member. We don’t need to ask for her test scores. We know we know what they are. She’s infuriated that anyone would suggest that Judge Jackson was nominated because of a race and sex after Joe Biden bragged repeatedly that Judge Jackson was nominated for her race and sex. It’s too funny. They demand that you listen to them very carefully, but they become apoplectic if you dare to repeat what they say. What’s the message here? Shut up. You’re not allowed to talk. No more insulin, surf.

Sorry, not playing along. Thankfully, in the hearings today, a few senators did manage to ask relevant questions. Here’s Josh Hawley:

Hmm. Well, that’s pretty serious. Why did you do that, Judge Jackson? Well, here was the response:

KETANJI BROWN JACKSON:  The guideline was based originally on a statutory scheme and on directives, specific directives by Congress, at a time in which more serious child pornography offenders were identified based on the volume, based on the number of photographs that they received in the mail, and that made totally, total sense, before when we didn’t have the internet, when we didn’t have distribution, but the way that the guideline is now structured, based on that set of circumstances is leading to extreme disparities in the system because it’s so easy for people to get volumes of this kind of material now by computers. If not, it helps to understand in the clip you just saw that Judge Brown was not articulating some legal principle related to the Constitution that we could generalize across our code. She was instead constructing a carve out for a narrow and specific group of criminals, sex offenders. It’s not the first time. It’s one of many such carve outs she has argued for during her career. In 1996, for example, Ketanji Brown Jackson argued in the Harvard Law Review against sex offender registry laws. Here was her reasoning: “If a community notification statute deprives the (sex) offender of his right to mobility or bodily integrity, and if it makes him the target of widespread community rejection, antipathy, and scorn” then according to Ketanji Brown Jackson, that would be unconstitutional.

Hmm. Why is it unconstitutional? She didn’t explain. Is that a sound legal argument? And why is Judge Jackson so fixated on defending sexual predators? What does the FBI think of that? Well, funny you asked about the FBI. This show has just obtained an email from the FBI’s Los Angeles Women and Black Affairs Committee.

It was sent out to every FBI agent in the FBI’s L.A. field office on March 11th, this month. It is an invitation to “a nomination party for Ketanji Brown Jackson.” Join us for “lots of celebrating,” the invitation reads. Now, the party was set for March 23rd in an FBI conference room.

Kristi Koons Johnson, the assistant director in charge of the L.A. field office, is the featured speaker. Huh? This is a nominee. This is someone who doesn’t have the job, whose nomination is, by definition, a political question. The Senate votes on it, that’s in the Constitution, by the way. And the FBI is weighing in with both feet on their choice, which is Ketanji Brown Jackson. So, we should tell you the next day, the FBI’s Diversity and Inclusion Office issued what it called an update. “The FBI must remain neutral in all political nomination and confirmation processes. Accordingly, a party for any nominee in FBI space would be inappropriate. (We) apologize for any misunderstanding surrounding the publicity for this event. “

Misunderstanding surrounding publicity. Not that we did it, but that you somehow misunderstood the publicity. Right? No, there was no publicity, we just read the invitation. The update included a new flier for the same party that removed any mention of Brown Jackson.

It’s not a misunderstanding. They just said out loud what everyone already knows. The FBI is a political force and has decided they’re on the side of Ketanji Brown Jackson. So, if you’ve got the White House and the Congress and the FBI, our three main power centers behind Ketanji Brown Jackson, she’ll probably get the job. Sorry. But we’d still like to see her LSAT score.

This article is adapted from Tucker Carlson’s opening commentary on the March 22, 2022 edition of “Tucker Carlson Tonight.”

Next post Tiny Love Stories: ‘The Empty City Was Our Playground’