RIO FERDINAND was quick to mock former Manchester United team-mate Patrice Evra after he wiped out Mo Farah during Soccer Aid on Sunday.

The French left-back featured for the Rest of the World XI in their penalty shootout victory against England at West Ham’s London Stadium.

And the 41-year-old had an eventful first half after winning his side a spot-kick having been fouled by YouTuber Chunkz in the 19th minute.

But he somehow avoided giving away a penalty later in the opening period after he clattered into Olympic icon Farah inside the box.

Evra got his feet all wrong as he attempted to hook clear a ball into the box from musician Tom Grennan.

He first missed the ball completely which allowed the four-time Olympic gold medallist to nip in ahead of him at the back post. 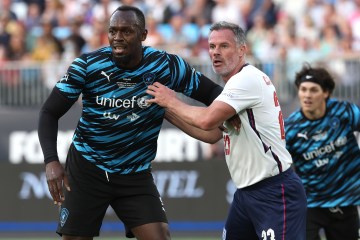 At the second bite of the cherry, Evra again looked to clear the ball before Farah had a strike on goal.

But he once again took a swing and a miss as he instead made contact with the Arsenal fan’s left foot.

Farah sent a wayward shot wide of the goal as he was completely wiped out by the Red Devils legend.

His protest was laughed off by the match official, with the system not in use during the charity match.

Ferdinand, who played alongside Evra at Old Trafford between 2006-2014, found the incident hilarious.

He quickly posted footage of the blatant foul on Twitter, where he added four laughing emojis, as well as tagging Evra.

The former Juventus defender is yet to respond to the post, but Ferdinand’s followers were quick to comment.

One user said: “Banter as its finest.”

Another remarked: “That’s a stonewall pen.”