When he looks back on his memories of World War II, Harry Whisler always mentions the 2,000-year-old Roman Bridge in Trier, Germany, where he brushed shoulders with Gen. George S. Patton in 1945.

Patton flagged down his tank, where Whisler was seated in the assistant driver’s seat after having caught a ride upon losing his jeep. The general, after tossing a glance at the red cross on Whisler’s helmet, proceeded to reprimand him for being in front of a machine gun as a medic.

“He asked me what I was doing sitting in the driver’s seat with my red helmet on,” Whisler remembered. “I never thought about that, you know? So he chewed me out a little.” When Patton started to walk away, he turned around and asked Whisler, “What would you have done with that machine gun there if you had to use it?”

“I’d have used it,” Whisler shot back, to which Patton replied, “Job well done, soldier.” 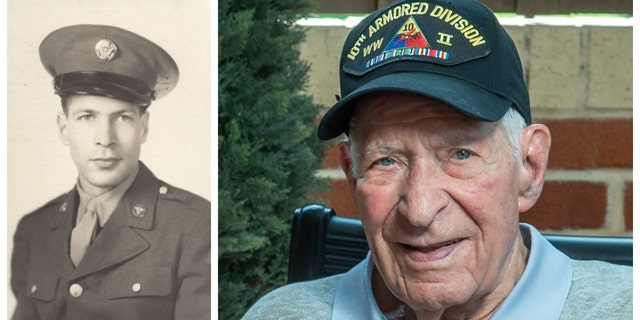 Whisler, who celebrated his 100th birthday in Texas on Wednesday, served as a medic in Patton’s 10th Armored “Tiger” Division and recently recounted to Fox News Digital his wartime experiences, as well as the lessons he has learned in his century of life.

Born June 15, 1922, in International Falls, Minnesota, Whisler had four younger siblings, two of whom are still alive and in their 90s. The family later moved to Midland, Michigan, where he grew up. When he was 20 years old, he enlisted in the Army on Nov. 23, 1942, just five months after marrying his high school sweetheart, Dorothy Grice. 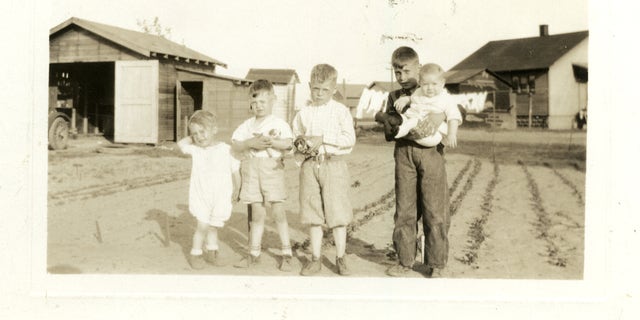 Whisler, second from right, with his four siblings in 1931. (Courtesy Whisler family)

Whisler went through rigorous training, after which he landed in Cherbourg, Normandy, France, in September 1944, three months after D-Day. He was given a jeep with orders to “follow the lead tank” as their convoy went through France from village to village.

His unit was the first to arrive during the Battle of the Bulge, where they defended Luxembourg while the other half of the division went to Bastogne. They went on to liberate the Saar-Moselle triangle and capture Trier before pushing through to the Rhine and into Bavaria. They fought fierce battles in Germany. 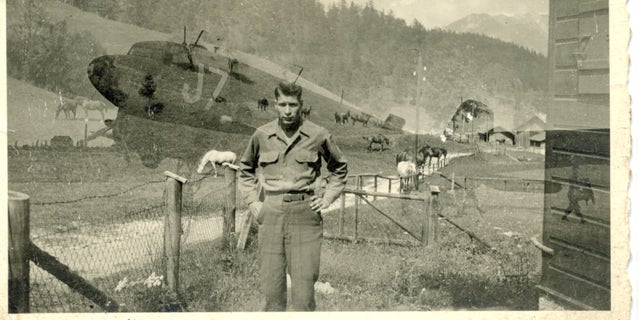 In Bavaria, Whisler was also one of the first four American soldiers to go into a concentration camp they found in the town of Landsberg am Lech, which is an event he still recounts with horror. His captain ordered him to inspect the three furnaces and other buildings of the camp, which was part of the Dachau complex.

“I opened one door and I didn’t open anymore,” he said, remembering how dead bodies were scattered everywhere and the stench of death overwhelming. He went over to investigate one of the boxcars on the nearby train tracks and found that it too was filled with corpses.

“You couldn’t fit another body in those boxcars,” he said. 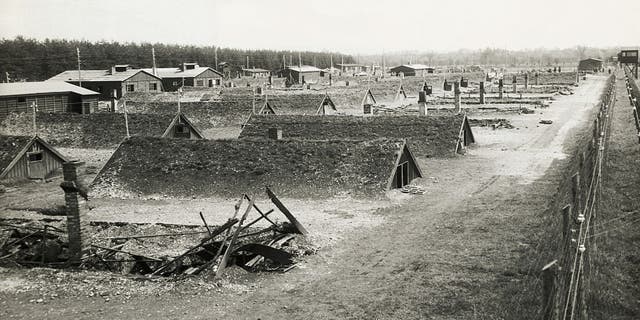 The German Stalag #4 in Landsberg, Germany, where SS troops burned and starved to death 400 Russian, Polish, French and Jewish political prisoners and left their bodies all over the grounds. (George Rinhart/Corbis via Getty Images)

Whisler, who was awarded the Purple Heart with two additional Oak Leaf Clusters after being wounded in action three times, classified himself as “slightly” religious and noted his parents were not churchgoers, but remembered that God came to his mind often throughout the war, especially when he was in pain.

Whisler was also awarded the Bronze Star, the Good Conduct medal, the WWII Victory Medal, the Combat Medical Badge and the European Campaign Medal with three stars for the campaigns in Ardennes, Rhineland and Central Europe. The U.S. Veterans Friends, Luxembourg gave him their Medal of Honor. In 2016, he received the French Knights of the Legion of Honor medal. 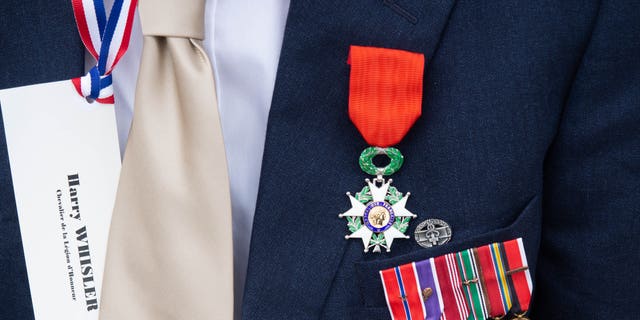 Whisler’s war medals, including the French Knights of the Legion of Honor he received in 2016. (Courtesy Whisler family)

After he returned to the U.S., Whisler worked as an electrical supervisor at Dow Chemical Co. for 44 years. In addition to his daughters, Margaret (Peg) Jones and Patricia Steinke, he also has nine grandchildren, 30 great-grandchildren and four great-great-grandchildren.

Noting how he was reluctant to talk about his war memories for many years until Jim Jones, his son-in-law, encouraged him to open up later in life, Whisler noted how he weekly played golf for more than two decades with a coworker whose war experiences he only learned of from his obituary.

“That’s how much the Silent Generation didn’t talk about their experiences,” Jones observed. 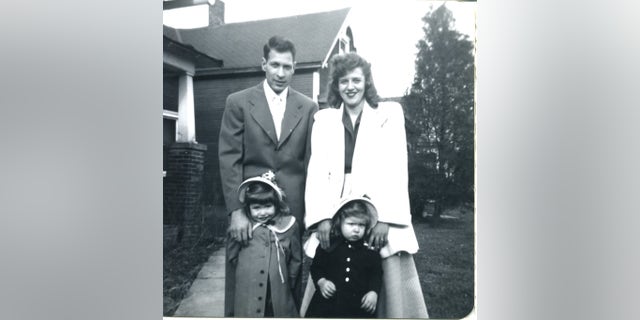 Whisler with his wife Dorothy and two daughters in 1950. (Courtesy Whisler family)

Jones still has the 700 letters Whisler sent to his wife from Europe, and noted that they show how his father-in-law did his best to shelter her from the horrors of what he was experiencing. He opened up more about the war after she died in 2008. He and his second wife Patricia married in 2010.

“His wife made a comment one time in a letter that she was tired of sitting around at home doing nothing, and he said, ‘Well, I’m tired of dodging these damn German shells.’ But that was the only time that he ever shared anything with her,” Jones said.

REMEMBERING D-DAY: ‘WE’RE HERE BECAUSE OF WHAT THEY DID’

Jones recounted to Fox News how he and his wife took Whisler back to Europe to tour the battle sites in 2010.

Whisler, who also owned a travel agency in addition to his work at Dow Chemical, had traveled extensively but had never returned to the specific places he went during the war. 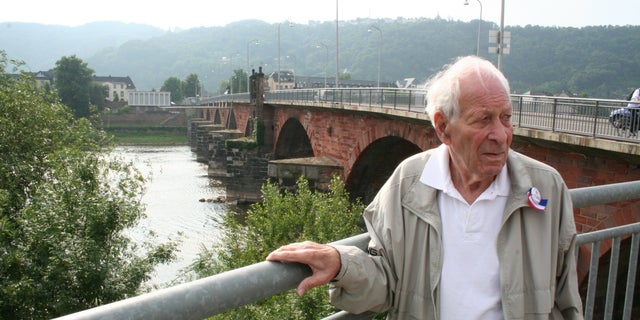 Whisler in 2010 revisiting the Roman Bridge in Trier, Germany, where he met Patton. (Courtesy Whisler family)

“We started in Paris, and everywhere that the 10th Armored went, we went,” Jones said. “We went there and did it in the sequence and in the order they did.”

Whisler is a local celebrity in his community of Granbury, Texas, which plans to honor him as a grand marshal in its Fourth of July parade this year.

Despite his long life, large family and many accolades, Whisler remains humble. He said he intends to celebrate his centenary “same as any other birthday, I guess.” 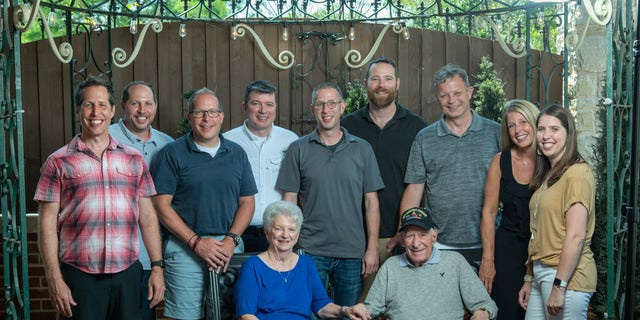 Whisler and wife Patricia with his nine grandchildren in 2021. (Courtesy Whisler family)

“I’ve always been a happy person, and I always tried to treat people decent,” he said when asked what his greatest lesson has been. “That was my goal in life.”

“I never thought I’d live this long,” Whisler reflected. He noted how he rarely sees young people anymore, but said he would advise them to avoid war if they can.

“I tell them that’s something you don’t want to do,” he said. “You don’t ever want to go to war unless you have to defend the United States.”