The small show was to benefit Folds of Honor, an organization that provides educational scholarships to the dependents, spouses and children, of fallen or permanently disabled soldiers. Folds of Honor was founded in 2007 by Lieutenant Colonel Dan Rooney of the United States Air Force F-16 fighter pilot. Since then, hundreds of millions of dollars have been raised and 35,000 scholarships have been donated.

Brice, 43, stopped to talk with Fox News Digital about his lengthy background supporting Folds of Honor and the event held at FWD Day + Nightclub in Cleveland.

“I’ve always supported the military but Folds of Honor just kind of…we just fell in love with just exactly what they do and the people that run it,” he said. “We just love to be apart of these events and you know, we had a party and everybody had a great show and had a good time but everybody knew why we were there.” 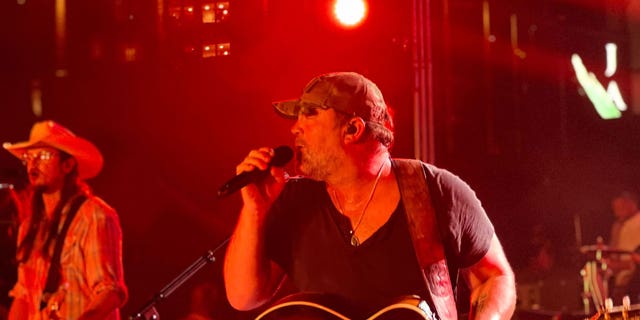 Brice, who performed fan favorites including “One Of Them Girls” and “Memory I Don’t Mess With” has been a major supporter of Folds of Honor for 10+ years. He started his own chapter in Nashville, Tennessee and performs shows all over the United States every year in support.

“For what they do, they support the families of fallen heroes and that’s really, truly what it’s all about,” Brice said. “So many kids now have had a future and gone to college and stuff like that because of Folds of Honor giving back to the families who are left alone, you know, left behind when their loved one is taken from them in service so what they do is just very easy to get behind and that’s why we’re here; we love it.”

While Brice was the main performer for the night, the evening was filled with entertainment of all kinds. Navy SEALs of the Patriot Parachute Team parachuted into the event with an American flag as the National Anthem was played via guitar. Later, Folds of Honor auctioned off an opportunity to parachute into the next Folds of Honor event with the SEALs themselves for a whopping $10,000. While the donor preferred to remain anonymous, he did comment on the donation. 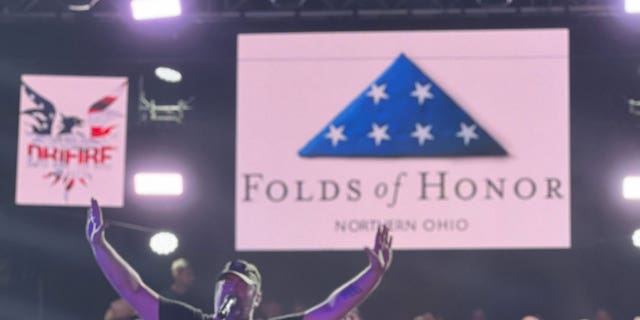 Brice has been involved with Folds of Honor for more than 10 years. (Sammie Sowinski)

“My wife and I are blessed to be here with our four kids and we realize that’s not possible without those that protect and provide our freedom every single day. The families who have lost loved ones and all those that have gone before us make it all possible,” the donor told Fox.

Other auction items included three signed Fender acoustic guitars, each for $10k, 30 signed cowboy hats for $150 a piece and to close off the event, a matched donation by CEO of Forward Hospitality Group, Michael Schwartz.

“We were super proud to have Folds of Honor here tonight and Lee Brice gracing our stage to an incredible crowd on an incredible evening,” Schwartz said. “I was excited to come up at the end of the show and offer a match for anybody that would donate the $5k which is a one-year scholarship for their organization. We were lucky enough after a lot of people gave a lot of money all night long, that two other people came to the table and donated $5k each which we are gonna match.”

With the donations and match, Folds of Honor raised an additional $20k within the last few moments of the event.

While Schwartz is proud of his partners and team for working with Dennis Tisza of Folds of Honor to donate the venue for the evening, he said the true sacrifice is in the lives lost of those fallen soldiers and the work the organization is doing. “We didn’t sacrifice anything; we did the patriotic thing.” 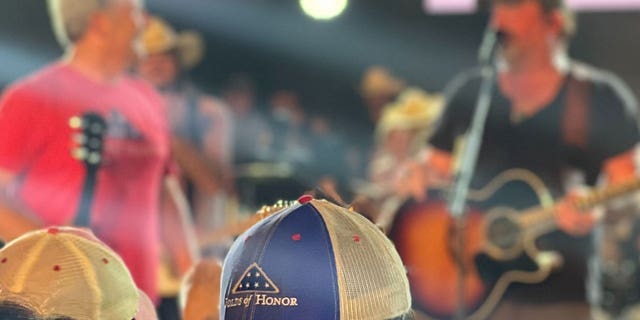 The country singer performed his hits including “One Of Them Girls” and “Memory I Don’t Mess With” at the Ohio concert. (Sammie Sowinski)

So what separates Folds of Honor from other charities? “You give to charities and they have very, very, very high expense ratios,” said Air Force Veteran, Dennis Tisza. “Folds of Honor has averaged since 2007, 91 cents of every dollar raised goes to fund a scholarship. That’s the top 1%. We are the top 1% of all charities nationwide in the United States. That’s why I do what I do for Folds of Honor.”

“Our tag line is ‘Honor their sacrifice, educate their legacy,” Tisza finished. And educate is exactly what they do.

Tiffany Eckert of Waterville, Ohio also graced the stage Wednesday night to offer her story of pain and perseverance following the loss of her Army husband in 2004. “Everything I do, my work with Folds, that’s how I say ‘I love you’ to my husband and while I can’t actually hear him back, I find the ‘I love you’ back in all of the people,” said Eckert.

Andy Eckert was deployed to Iraq in 2003. He was a Purple Heart Veteran and deemed non-deployable but when his unit got activated to go back to Iraq in 2004, Eckert volunteered. He deployed on Christmas day in 2004 and was killed by a terrorist on Mother’s Day in 2005. He left behind not only a wife, but two babies, Marlee Freedom and Myles.

Eckert and her two children, now both teenagers, are all three recipients of Folds of Honor scholarships. Tiffany is currently in undergraduate school studying Human Development and Family Studies with a minor in Gerontology. She will graduate a year early and pursue a Master’s Degree.