A MOTHER was shot dead this week while visiting her son’s gravesite on what would have been his 22nd birthday, family said.

Images from the cemetery showed bullet holes covering the side of a Chevy Camaro surrounded by crime scene tape.

N’Gaojia’s ex-husband Kineh (right) said she was at the cemetery on what would’ve been her son’s 22nd birthdayCredit: Facebook

A video from January 15 showed flowers and memorial items at the graveCredit: Facebook

N’Gaojia’s ex-husband Kineh said in a Facebook post: “I have no words because I can’t believe this is real.”

He told local CBS affiliate KWTX that N’Gaojia was visiting her son Amir Tajai-Kineh N’Gaojia’s grave when she was shot.

Killeen police confirmed a second victim had non-life-threatening injuries after the shooting and was treated at the scene. 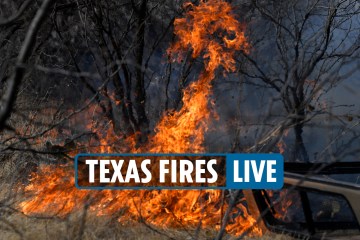 Police were called to the area shortly after 5pm on Tuesday. They released few details about the incident.

N’Gaojia’s ex-husband identified her as the victim and said the couple had three children together but were divorced.

“This is stuff you see on movies but it has become our life. I can’t believe you are gone,” his Facebook post continued.

In another post, he said: “‘My children will never be the same again. We are all f***ed right now.”

Another son, Q Jones N’Gaojia, posted a photo with his mother on Facebook with the caption, “I love you Mama. Stay with me.”

Although it is not clear what Amir’s cause of death was, Facebook posts and obituaries show he died on New Year’s Day in 2022 at age 21, the Daily Mail reported.

He reportedly had a criminal history that included aggravated assault with a deadly weapon, the Killeen Daily Herald reported.

The US Sun contacted the Killeen Police department for comment on Friday but did not immediately get a response.

No information regarding a suspect or suspects is currently available.