EMMA RADUCANU was full of nerves for ‘T’ with the Queen.

The tennis star was summoned by Royal Appointment as one of the celebrities chosen to send Her Majesty a special Jubilee message for Saturday’s Platinum party.

Raducanu was ‘pronouncing all my Ts’ for a personalised message to the QueenCredit: Getty

And Raducanu was careful to talk properly in the video when she joined Sir David Attenborough, David Beckham, Stephen Fry and Dame Julie Andrews in saluting the Queen’s 70 years on the throne.

She revealed: “The message for the Queen, when I was asked to do that I was definitely a bit nervous.

“I was pronouncing all my Ts. It was pretty surreal and a real honour of course. And to see my face on the screen, I was like: ‘This can’t be real!’”

The invite was recognition for her incredible US Open triumph last September. 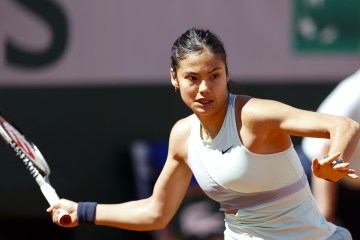 Raducanu described the past 12 months as ‘surreal’.

A first-round defeat to Brit Harriet Dart at the Nottingham Open in June 2021 was her first appearance on the WTA circuit.

That was just a few weeks after taking her A Levels.

Few could have predicted the meteoric rise since, first reaching the Wimbledon fourth round and then the transatlantic triumph.

Tuesday sees Raducanu, still only 19, play Swiss star Viktorija Golubic in her first match on grass this summer as the Road to Wimbledon begins again in Nottingham.

Raducanu said: “To come back 12 months later knowing what happened is pretty surreal. It is where it started over for me and I am proud of what I have achieved over the last 12 months.”

Raducanu plans to do things her own way and is likely to appear at this month’s Wimbledon for her homecoming without a coach.

In the past 12 months, she has split with Nigel Sears, US Open-winning mentor Andrew Richardson and then the German Torben Beltz after five months together.

World No 11 Raducanu said: “I want to take my time with this decision.

“Nothing has changed. I still have the same people, good people, around me. I don’t want to rush into anything.

“I’m still 19 and I’ve already won a Grand Slam so I can take my time and put things in place because I know my motivation isn’t any less.”

If Raducanu wins on Tuesday, she will play Heather Watson in the second round after the Guernsey star beat American Katie Volynets 6-4 6-2.

Dart was an impressive 6-4 6-3 winner over Croatia’s Donna Vekic while men’s No 1 seed Dan Evans knocked out Frenchman Enzo Couacaud 7-5 7-6.