The massive migrant caravan, which at one point swelled up to well over 10,000 migrants as it set off toward the U.S. border from southern Mexico, has now broken up as Mexican officials have offered temporary visas to migrants – although organizers say they will still travel to the U.S.

Organizer Luis Villagran told Fox News that about 80% of migrants in the caravan, approximately 9,000, have received a migratory multiple form (FMM). That travel visa allows them to travel freely in Mexico temporarily.

Villagran told Fox News that, although the caravan is breaking up, all the migrants in the block are heading to the United States to attempt to make their way into the country. 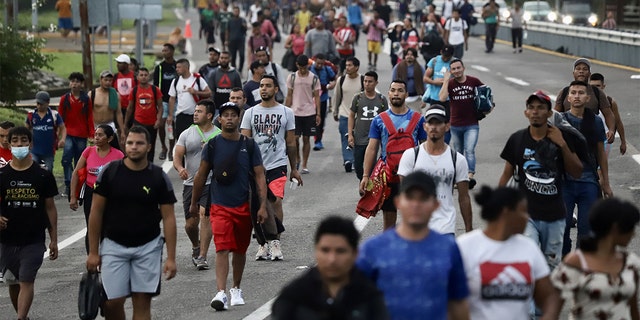 Migrants walk on the road at the migrant caravan in Huixtla, Chiapas, in Mexico on June 9, 2022. The caravan from Huixtla to Mapastepec restarted with an approximate contingent of 3,000 migrants.  (Jacob Garcia/Anadolu Agency via Getty Images)

The caravan set off from Tapachula, Mexico earlier this week and met little resistance from Mexican authorities. Organizers also said that the caravan had hit a police check where there were the Mexican National Guard, immigration officials and state police – but officials let the caravan through “freely.”

The migrants organized the caravan specifically a week ago because Mexican officials were not providing the temporary documents in Tapachula.

Now, after a week and walking less than 25 miles, they have effectively received what they wanted, with Mexico granting them the legal status to head to the US border without being in Mexico illegally. Under Mexican laws, migrants cannot travel past the Mexican southern state of Chiapas without documentation. This was a response to the 2018-2019 caravans. 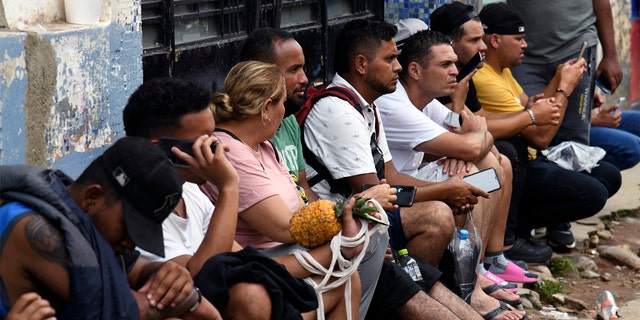 Migrants wait to collect payments sent by their relatives to continue with the caravan heading to the border of Mexico and the United States, in Huixtla, State of Chiapas, Mexico on June 10, 2022.  (ISAAC GUZMAN/AFP via Getty Images)

Villigran said that as of yesterday evening, less than 3,000 migrants got on buses that the Mexican immigration office provided to take them to the customs office. Now, more than 9,000 have been issued.

It’s one of a number of massive caravans in recent years that has made its way toward the U.S. border, including one in October last year – which are typically broken up by Mexican authorities before they reach the border. However, as with this caravan, just because the caravans are broken up does not mean that the migrants involved stop moving north.

The U.S. has been seeing massive migrant numbers, with caravan-size migrant numbers being encountered every few days by agents along the border. There were more than 234,000 encounters in April alone, and that number is expected to rise over the summer.

Meanwhile, the Biden administration has been blocked from ending Title 42 public health expulsions — through which a majority of migrants have been expelled since March 2020. That move to end the order was seen as a motivating factor for more migrants to try their luck at getting into the U.S.

PHOTO GALLERY: HOW THE CRISIS AT THE SOUTHERN BORDER UNFOLDED, AND SPIRALED OUT OF CONTROL

The Biden administration has faced heavily criticism for its handling of the crisis, with Republicans tying the surge to the administration’s rollback of Trump-era policy and a lax interior enforcement – combined with calls for mass amnesty in Washington D.C. 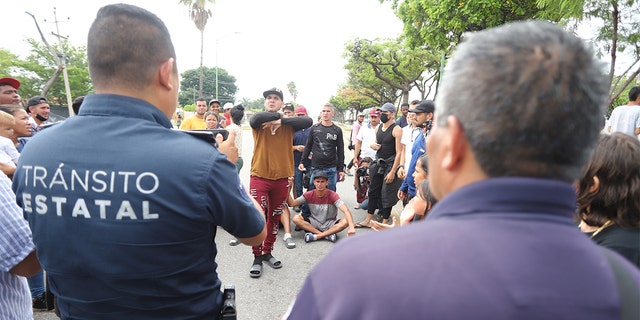 The Biden administration has blamed “root causes” like poverty, violence and climate change for the increase in numbers and has rolled out a number of initiatives to tackle those root causes – led by Vice President Kamala Harris.

President Biden on Friday, along with a number of Western Hemisphere leaders, unveiled a “Los Angeles Declaration” at the Summit of the Americas – which stated shared principles related to migration. The U.S. committed to a number of concrete measures, including an expansion of work visas, refugee resettlement and millions in funding for refugees and migrants across the hemisphere.

However, the leaders of Mexico, Guatemala, Honduras and El Salvador were not in attendance.

Next post How to Watch the Jan. 6 Committee Hearings