A massive tornado has swept across Oklahoma, destroying many homes and leaving several residents trapped under the debris of their destroyed homes, according to a report.

While several injuries have been reported through the Kingston area, there have been no reported deaths.

Photos taken at the scene show the carnage left behind as homes were wrestled down to their foundations, vehicles were flipped over, and debris sprawled for miles.

Rainbow after the storm here in Kingston, OK. Thankfully I’ve only heard of 2 injuries at this point. Quite a bit of structural damage along Hwy 70 though from a tornado that hit at approx 6:30 pm. #okwx #koco5 pic.twitter.com/e4qAe84JBb

TORNADO DAMAGE: Jennifer sent these from the Buncombe Creek area near Lake Texoma. She tells me she’s still waiting to hear from friends. Some stuck in their homes. Others taken to the hospital.

Please keep these folks in your prayers tonight. pic.twitter.com/5wlj00b8SG

The Oklahoma Department of Transportation was forced to close US-70 as its crews cleared the roadways for safe use, Fox 25 of Oklahoma City reported. 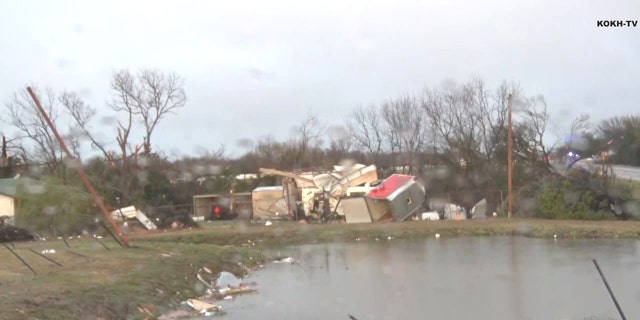 A video reportedly taken in the tornado even showed a truck flipped completely over before it miraculously drove off.

We are opening a shelter for people affected by the tornado that hit Kingston.
Kingston High School
400 NE 3rd St.

If you are in need of assistance, please call 1-800-RED-CROSS. pic.twitter.com/ko9EqWYxU2