THE MARRIED DESIGNERS Bessie and Oliver Corral bring both laid-back Mediterranean warmth and unstoppable drive to everything they do. When, in the early months of the pandemic, Oliver, 48, began making sourdough bread for Bessie’s family, with whom they were staying in London, it wasn’t long before he graduated to baguettes and croissants, producing them in such quantities that he briefly considered opening a bakery (instead, he delivered his surplus to friends around the city). That spring, away from their jobs and home in New York, the pair also thought about updating their apartment, a 2,000-square-foot duplex in Greenwich Village. But what began as a plan to simply repaint the walls evolved, when they returned to Manhattan that summer, into an all-encompassing renovation — one they completed entirely themselves. “We both have this obsessive world in our brains,” says Bessie, 35. “It’s a little dangerous.” 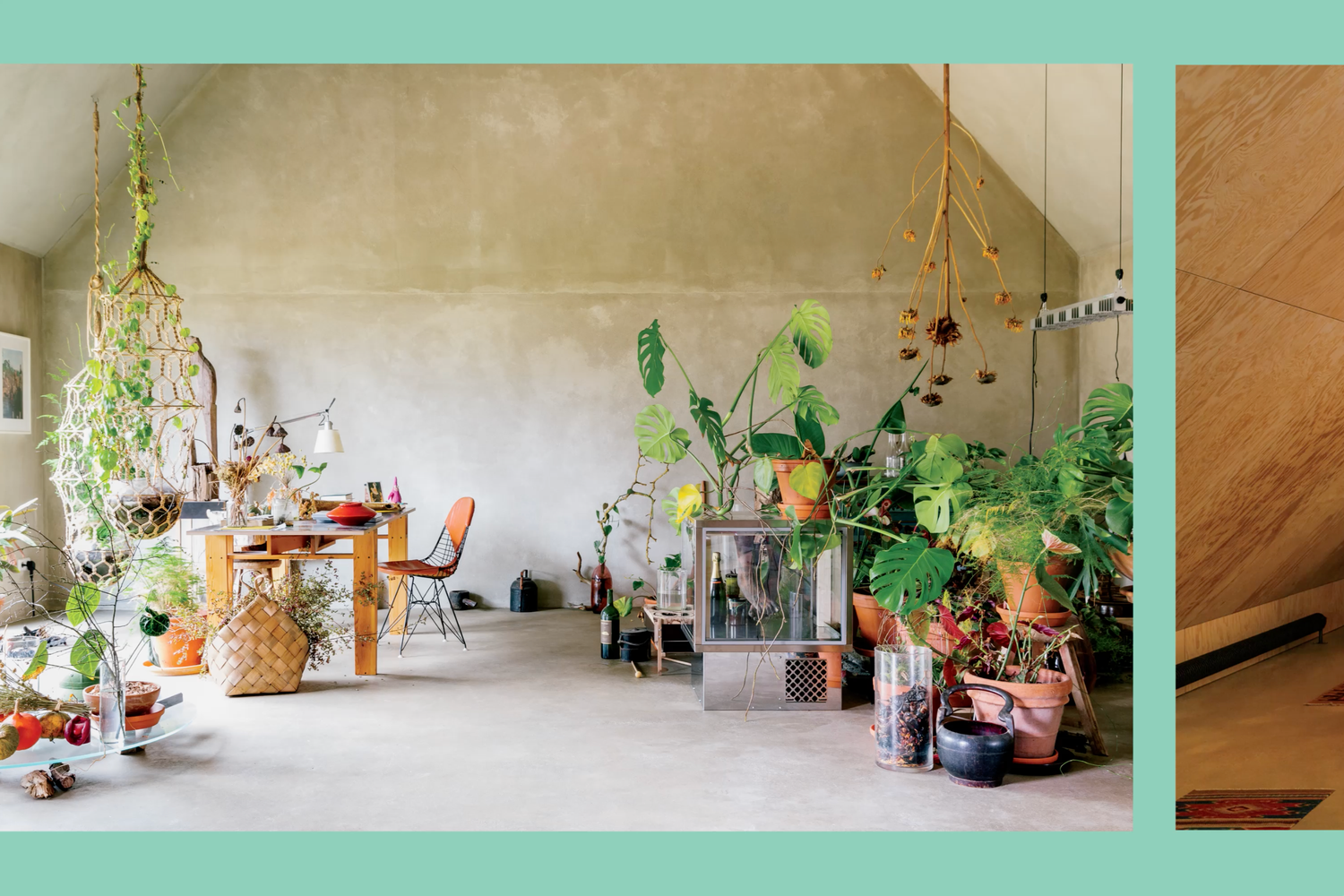 When the couple founded their brand, Arjé, in 2017, they also had an ambitious holistic vision. Though they began by offering women’s and men’s clothes — drawing on their seven years as the co-designers of Urban Zen, Donna Karan’s wellness-oriented lifestyle company — they saw these collections as part of a larger world. “We’ve never been able to just make a suit or a dress,” says Bessie. “We need to design the color of the wall the pieces hang on, the scent in the air.” They dreamed of expanding into housewares and eventually realizing domestic, restaurant and hotel interiors that would immerse clients fully in Arjé’s universe, one defined by natural materials, earthy colors and an overarching sense of visual, even spiritual, harmony. Yet as demand increased for their clothes (understated but sumptuous staples such as shearling jackets, suede pants and fringed wool capes), they found themselves drifting away from their original goals. And they felt at odds, too, with their home, which functioned like an office — their kitchen doubling as a shipping center, their living room as a showroom — and whose industrial dark gray interiors, the result of a redesign when they moved in nine years ago, no longer matched their shared aesthetic. Reimagining the space as a calm, bright sanctuary informed by their southern European roots (Oliver is Spanish; Bessie is Turkish) became a matter not only of realigning themselves with their environment but of laying the foundation for their brand’s future — and their own.

FITTINGLY, THEY BEGAN with breadboards, wood serving platters with carved handles topped with a circle, a triangle or a square — symbols representing, respectively, mind, body and spirit in the ancient proto-scientific practice of alchemy. Those three shapes, which together communicate the Corrals’ philosophy of universal interconnectivity, became the defining elements of their apartment — recurring in various configurations and materials — and of Arjé Home, the collection of furniture and objects they developed in tandem with the renovation. “The idea was that all the lines of the space connect,” says Bessie. “So that if you took a pen and were drawing it, every shape would begin where another ended.”

The first major change she and Oliver made to the duplex was opening up their 10th-floor living area by cutting two wide arches into the walls, which echo the form of the alchemical circle while also speaking to a design trend toward Art Deco-inspired interiors, defined by 1920s-style curves, soft neutrals and metallic ornamentation. One arch is an eight-foot-wide half-moon that allows light and meals to pass between the compact kitchen, which sits at the back of the apartment, and the dining room, which is bordered by a large bank of windows; the other is an open curved doorway that connects the dining room to the airy 700-square-foot living room. To increase these three rooms’ sense of continuity, the Corrals refinished their once dark walls in a palette of luminous beiges and creams. For the kitchen, which they imagined as an inviting Mediterranean-style enclave in which to cook and welcome guests, they developed a pale blush plaster that they also applied to the countertops to contrast against the black plaster finish of the central island.

All three rooms are anchored by black oxidized oak floors, and there are imaginative hand-rendered details throughout. Rather than resurface their generic laminate kitchen cabinets with oak, as they had initially planned, the couple sanded them down and coated them with fawn-colored chalk paint, using a thick-bristle brush to create a faux-wood effect. “Our question was always, ‘How can we work with things that we have available?’” says Bessie. The back wall of the dining room is clad with narrow vertical strips of oak that Oliver painstakingly cut and shaped into a half-circle (for much of last year, he made twice-weekly trips to Home Depot). And every piece of furniture is of the duo’s own design, developed from prototypes Oliver hand-built from plywood — he transformed their small terrace into a workshop and taught himself how to use power tools by watching YouTube tutorials — and later had fabricated in wood, some of it repurposed from salvaged barn beams, by a Rochester, N.Y., workshop with which Arjé now partners on larger projects. “We wanted to understand how the actual materials really work and how to communicate with makers,” says Oliver. “So we went on this journey for months, experimenting, going down rabbit holes and learning from craftspeople.”

One of the first pieces he and Bessie created was their coffee table, which sits in front of a deep cream linen-upholstered angular sofa in the living room and consists of a round glass top balanced on a trio of variously circular, square and triangular black walnut legs. A few feet away, an armless shearling-wrapped lounge chair and matching ottoman, both with slanted triangular legs, arose from the couple’s effort to translate the snugness of their aviator jackets into a comfortable seat. And in the dining room is the eight-foot-long Tessa table, which they designed with a purposefully narrow rounded rectangular walnut top, just 38 inches wide, to allow for physical intimacy and easy conversation.

When it came to decorative objects and smaller furnishings, the Corrals turned to a group of 30 independent artisans that Bessie contacted during the renovation. All of these pieces, whether curated by or co-designed by the homeowners — and ranging from sculptural ceramic side tables by the Brooklyn-based maker Danny Kaplan to anthropomorphic terra-cotta lamps topped with raffia shades by the Barcelona-based potter ​​Marta Bonilla — are available to buy through Arjé’s website.

Still, at its heart, the home was a personal project, an attempt to make tangible the world they’ve long been conjuring together. Nowhere is this clearer than in their upstairs bedroom, accessed via a white metal spiral staircase opposite the kitchen. A light-filled, minimalist aerie with lime-washed walls and a low oak platform bed framed by shelves arranged with handmade ceramics, the room is intended to evoke the simple, sun-bleached beauty of Puglia, Italy, where the couple got married in 2016, and of Greece, where they spent their honeymoon sailing among the Aegean Islands on a boat — which, of course, they captained themselves.