A 21-year-old Maryland man on vacation in Myrtle Beach, South Carolina, drowned earlier this week after rescuing the child of another swimmer from a rip current, according to officials and local reports.

Willard said the body of Dbumeni-Ndaleu was discovered washed ashore around 3:30 a.m. Tuesday near 54th Avenue North. He reportedly died of asphyxiation due to drowning.

The other swimmer and his son were not identified. It was unclear whether they were treated for injuries.

Police said Monday was a double red flag day at the beach, according to Willard, which means that swimming was considered dangerous even for experienced swimmers. Willard said that Horry County typically sees three to four drownings each summer. 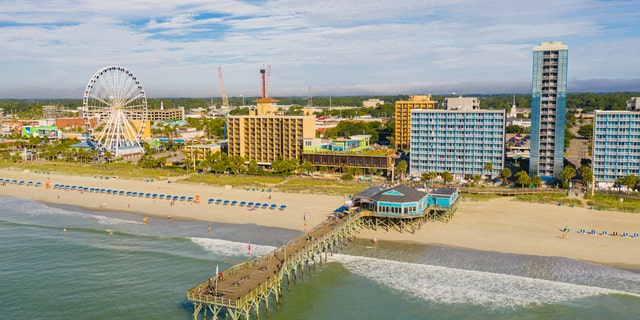 A 21-year-old Maryland man drowned in Myrtle Beach after helping to pull another swimmer’s son out from a rip current, according to officials. (iStock)

Rips currents are powerful, narrow channels of water that can move at speeds up to 8 feet per second, faster than an Olympic swimmer, according to the National Oceanic and Atmospheric Administration. The agency said it is estimated that rip currents kill 100 people annually.

Experts advise swimmer who get caught in a rip current not to fight against it. Instead, experts say swimmers should swim parallel to shore and swim back to land on an angle.