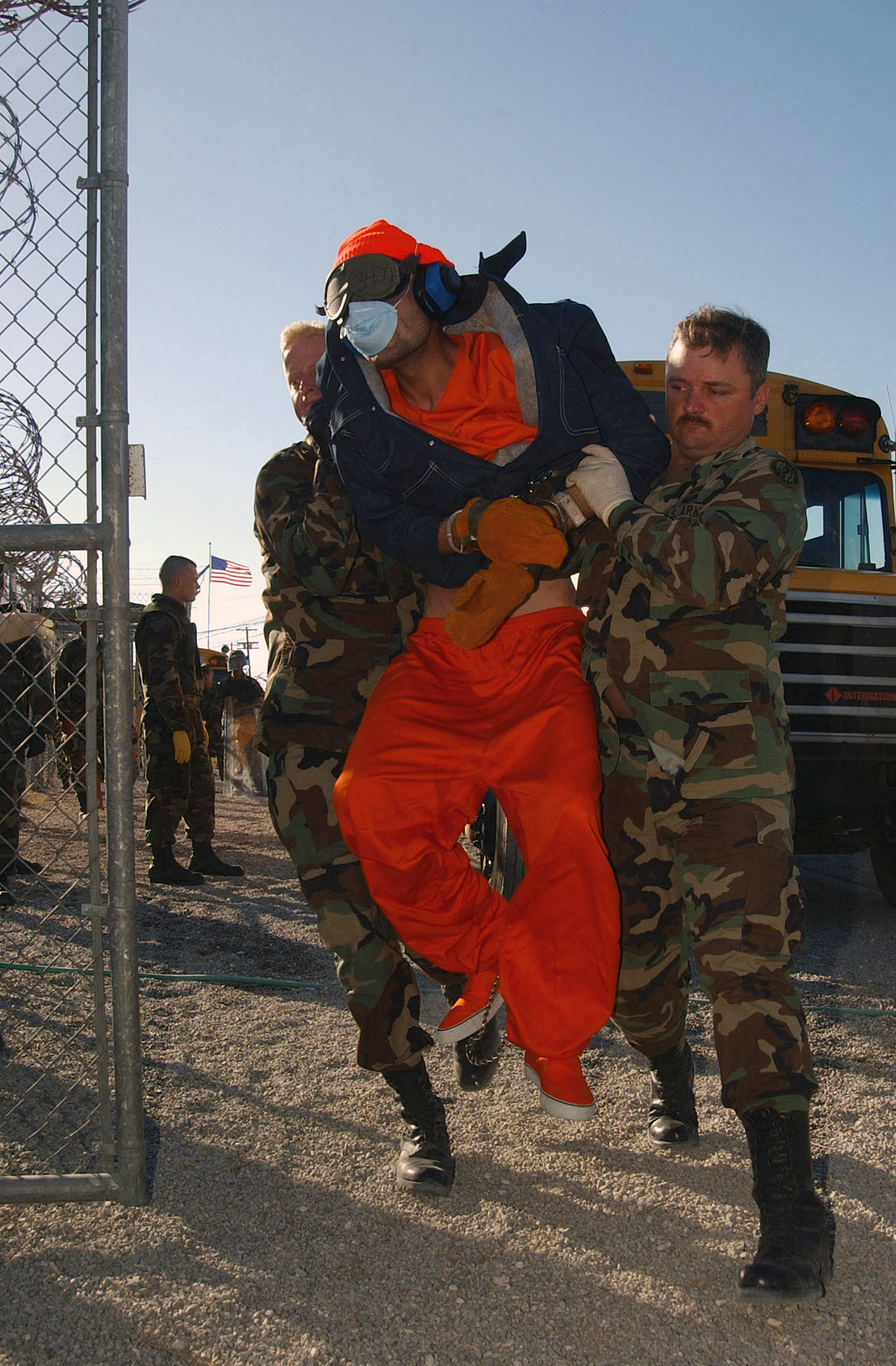 GUANTÁNAMO BAY, Cuba — For 20 years, the United States military has tightly controlled what the world can see of the detainees at Guantánamo Bay.

No images of prisoners struggling with guards. No hunger strikers being tackled, put into restraints and force-fed. Few faces of U.S. forces escorting captives in shackles. And in time, no photographs of detainees or their guards at all.

In 2011, WikiLeaks released classified pictures of some prisoners from leaked intelligence dossiers, and lawyers provided some portraits of their clients taken by the International Committee of the Red Cross. But few other explicit images of the prisoners have become public since they began arriving at Guantánamo just months after the Sept. 11, 2001, attacks.

Until now. Using the Freedom of Information Act, The New York Times has obtained from the National Archives less antiseptic photographs of the first prisoners who were brought from Afghanistan to the wartime prison in Cuba.

Released this year, these pictures were taken by military photographers to show senior leaders, chief among them Donald H. Rumsfeld, then the defense secretary, an intimate view of the offshore detention and interrogation operation in its early stages.

The practice of managing the visual narrative started the very first day detainees arrived at the base, Jan. 11, 2002. The military forbade two news photographers, from CNN and The Miami Herald, from capturing history as it unfolded: They could watch the first prisoners arrive but had to leave their cameras behind.

Instead, about a week later, the Defense Department handed out a picture of the first 20 prisoners on their knees at Camp X-Ray, the makeshift prison camp where captives were kept in the earliest months of the operation. It was taken by a Navy photographer and initially intended for the eyes of only the Pentagon’s leaders. 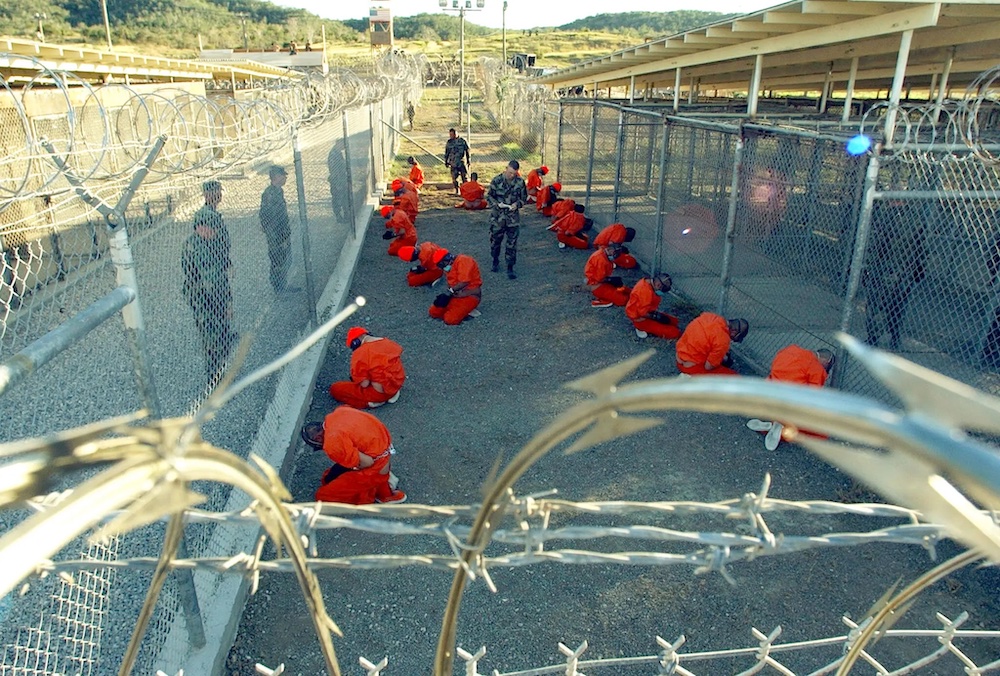 The Geneva Conventions oblige countries holding prisoners of war to protect them from “public curiosity.” A post-9/11 interpretation by the Bush administration permitted the Pentagon to release the image of 20 men in shackles and on their knees because their faces were not visible.

But the photograph also reinforced the Pentagon’s message that the men and boys who were brought to Guantánamo — around 780 of them, all during the presidency of George W. Bush — were “the worst of the worst,” because they had ended up there.

In time, the record would show that was not true. Only 18 detainees were ever charged, and only five have been convicted by a military tribunal. Ten detainees are still in pretrial proceedings, including the men accused of the Sept. 11 attacks. President Barack Obama promised to close the prison, but was blocked by opposition from Republicans on Capitol Hill. Successive administrations sought to whittle down the number of men held there. All but 37 of the detainees are gone, some released as mistakenly swept up in the U.S. military and intelligence dragnet and others deemed foot soldiers of Al Qaeda and the Taliban who could be safely sent home for their nations to manage.

If the pictures in this collection had been taken by news photographers today, none would have survived the censorship imposed by the military at Guantánamo Bay.

They show the look in a young Marine’s eyes as he studies the face of the first “enemy combatant” he would encounter in the war. They show routine security measures, including restraints, which military censors would later forbid in news photos. They show how frail and malnourished many of the men were, and that they were shackled at their wrists and ankles inside a military hospital tent.

One of the most dramatic photos shows how the military improvised during its first flight that brought detainees to Guantánamo Bay. According to Jeremy Lock, the military photographer on the plane, a man had tried to wriggle out of a makeshift blindfold. So they bound him with duct tape.

Someone among the security forces planted an American flag in the restrained, mitten-covered hand of the man sitting next to the duct-taped prisoner, and took a souvenir photo. Mr. Lock captured that image as well, for his bosses to see what had been done.

The duct-taped prisoner is the same man seen in a photo of Marines puzzling over how to get him aboard the school bus that would take him across Guantánamo Bay to the facility where he would be held, Camp X-Ray. The photo is a study in the juxtaposition of three men’s feet.

U.S. forces on duty at the time recalled that only one man arrived that day with a prosthetic leg, and prison documents suggest he was Mullah Fazel Mohammad Mazloom, a deputy defense minister and a commander of Taliban forces in northern Afghanistan at the time of the Sept. 11 attacks.

He was released to the custody of Qatar 13 years later in a prisoner exchange for Sgt. Bowe Bergdahl of the Army. After the Afghan government fell to the Taliban last year, he became a deputy defense minister in the militant government.

Mr. Lock, the military photographer, recently said he understood the reason for the security measures — wrist and leg restraints to prevent the detainees from moving, blindfolds and earmuffs to prevent them from plotting, medical masks to guard against the possible transmission of tuberculosis.

Nonetheless, he said, the sensory deprivation techniques reminded him of his earlier training as an airman in the prisoner-of-war survival program called SERE, short for the Survival, Evasion, Resistance and Escape school.

C.I.A. agents would repurpose aspects of that program to interrogate and torture suspected senior members of Al Qaeda. History shows those enhanced interrogations would begin months later, after hundreds of detainees had been brought to Guantánamo Bay.

Carol Rosenberg has been covering the U.S. naval base at Guantánamo Bay, including detention operations and military commissions, since the first prisoners were brought there from Afghanistan in January 2002. She worked as a metro, national and foreign correspondent with a focus on coverage of conflict in the Middle East for The Miami Herald from 1990 to 2019.