SEBASTIAN VETTEL produced the highlight of the Azerbaijan Grand Prix with a remarkable manouvre to avoid crashing out.

The Aston Martin driver, 34, stunned fans by avoiding a collision while also maintaining momentum instead of coming to a halt.

The incident occurred after Vettel powered past Esteban Ocon on the long straight on lap 13.

Vettel’s front left wheel then locked up which prevented him from taking turn three – instead forcing the German to use the emergency lane.

The four-time F1 world champion easily could have crashed into the wall after losing the ability to control his front wheel but he turned brilliantly and completed a 180 to return to the track in one swift movement.

Vettel almost collided with Yuki Tsunoda as he returned to the race but let him pass, which meant he lost position to the Japanese as well as Ocon and Lewis Hamilton. 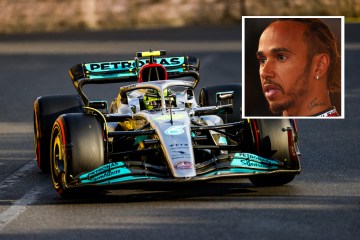 The incident could have forced Vettel out of the race altogether so fans were impressed by the driver’s skills.

One fan wrote on Twitter: “One of the best recovery I’ve seen.”

Another added: “That spin turn from Vettel is one of the greatest things I’ve ever seen.”

And a third said: “That was such a badass donut turn it was amazing.”

By contrast, Lando Norris needed a five-point turn and around 40 seconds to get out of the same emergency lane during practice on Friday.

Vettel spoke to F1.com about the incident after the race, saying: “I think I was already past Esteban then [I braked] a bit late because I was sure he’s gonna battle for it.

“But I wasn’t quite sure [if I would make the corner] so I took the emergency lane and lost a lot of time.

“Without that time, I think we could have had a battle for P5 on our hands. But nevertheless, I think it’s a really good result.”

Next post John Hinckley concert canceled by NYC venue: ‘Not worth a gamble’